China and Singapore are very distinct markets within Asia. The same can be said about its real estate, an integral part of their respective economies.

Yet, we observe disparate differences in the policies that govern China and Singapore’s public housing – differences that we will explore in-depth within this article!

While both governments enact public housing policies extensively to achieve similar aims – essentially, to provide affordable housing for its residents – we see a significant contrast with the state of Singapore’s public housing market vis-a-vis China.

With the analyses of both markets, we may then gauge how crucial a role public housing plays within a country’s real estate market. 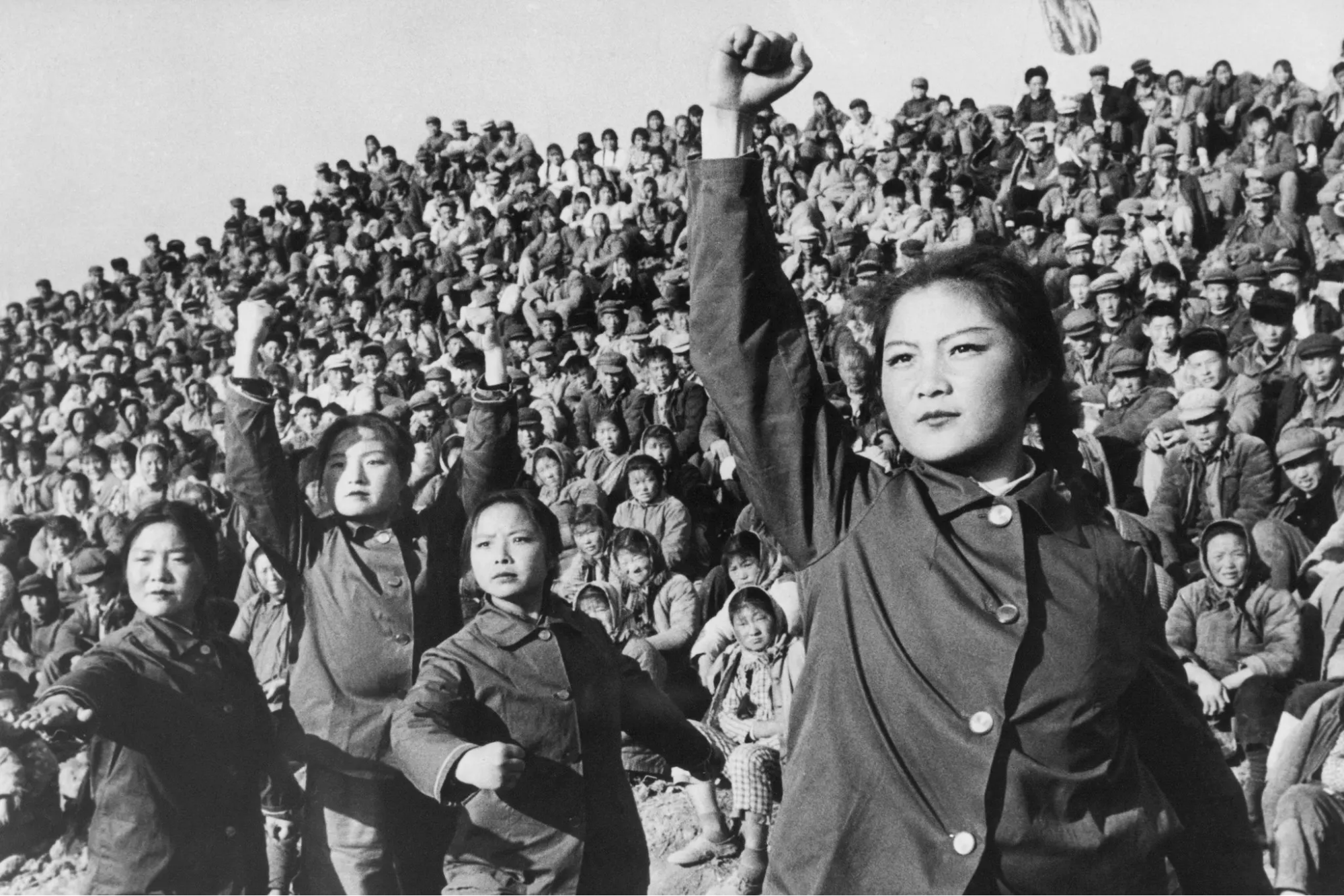 In the wake of the Cultural Revolution that covered the latter half 1960s and most of the 1970s, the Chinese government realised that land reform needed to be implemented quickly.

Urban expansion had taken over half of all rural land from 1949 to 1960 (source). For many in China that depended on farming for their livelihoods back then, this meant that in eleven years, half of their homes, their farm plots, and their land had been taken over by towns and industries.

When Deng Xiaoping took over in 1978, as part of wide-ranging reforms for the country, he decreed state-owned work units (or danwei in the socialist context) to help build new apartment buildings twelve to fourteen stories high to cover this land shortage (source). The reforms were intended to keep motivation among Chinese workers high as they became more dependent on these work units for their livelihoods.

Context: before Deng Xiaoping’s reforms in China, “iron rice bowls” were commonplace. State-owned enterprises, or “单位” (pronuced as danwei), provided extensive welfare to their employees. Imagine if your company provided you with apartments, clinics, shops and services. 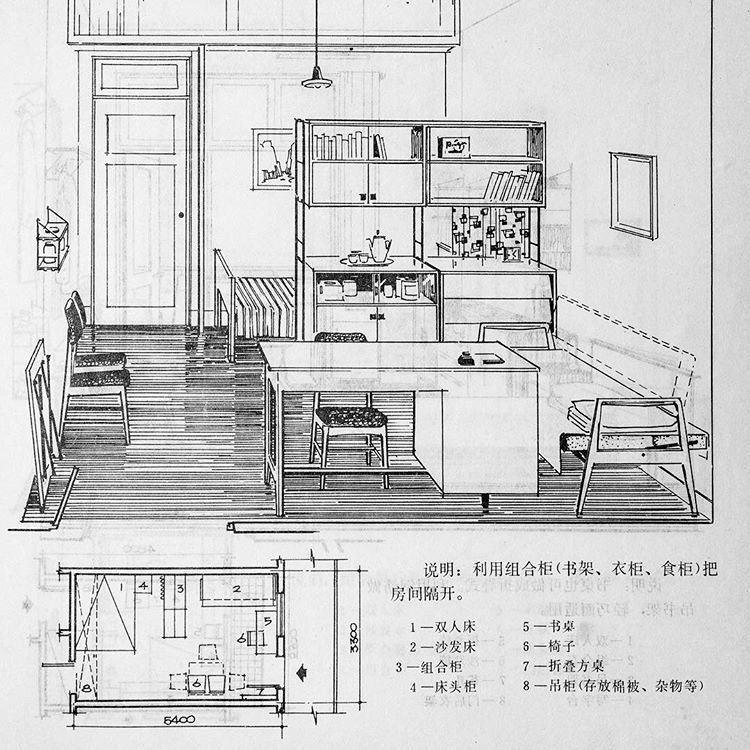 Studies show that public-sector housing had dominated the market at around 74.8 per cent by the end of the 1970s (source).

In 1998, the public housing market was further reformed. What was once a handout or a welfare benefits system for the Chinese in the 1970s had to slowly shift to a more market-oriented system dictated by price and demand. China, after all, needed to participate in the global economy in the wake of the post-Cold War system and had to adopt characteristics of market economies to keep up.

Yet while the 1998 reforms diminished the role of the State and, by extension, the public housing market in the Chinese economy, it was never entirely abolished. The ‘economical and comfortable housing’ (ECH) policy in 1998 would have the State continue to provide affordable housing for its low-income citizens.

Like Singapore, the ECH policy was designed to keep a high level of homeownership for Chinese residents amidst a more privatised economy – especially for lower-income households.

Does the name sound familiar? China’s HPF, introduced in 1995, is indeed inspired by Singapore’s Central Provident Fund (CPF), a public housing policy that we will explore later on.

Imagine if you’re a part of a middle-class household in China. You are fortunate enough to have enough money to not depend on your local state government to provide you with an ECH. However, you’re not financially sufficient to shoulder payments on a new apartment with your own money.

Amid a more market-oriented housing market, the Chinese government has also implemented the HPF, a compulsory savings system to provide housing loans to employed Chinese homebuyers.

In theory, this ‘forces’ employed Chinese residents to set aside a portion of their earnings, which

The Results: The Chinese Status Quo

Many academics and analysts believe that Chinese public housing reform needs improvement, especially after the 90s. Essentially, such reforms have been limited in providing for lower incomes in the midst of what may be a growing bubble within Chinese real estate.

To begin with, some believe that the ECH policies have not been a chief priority for the Chinese government, especially in the mid-2000s. 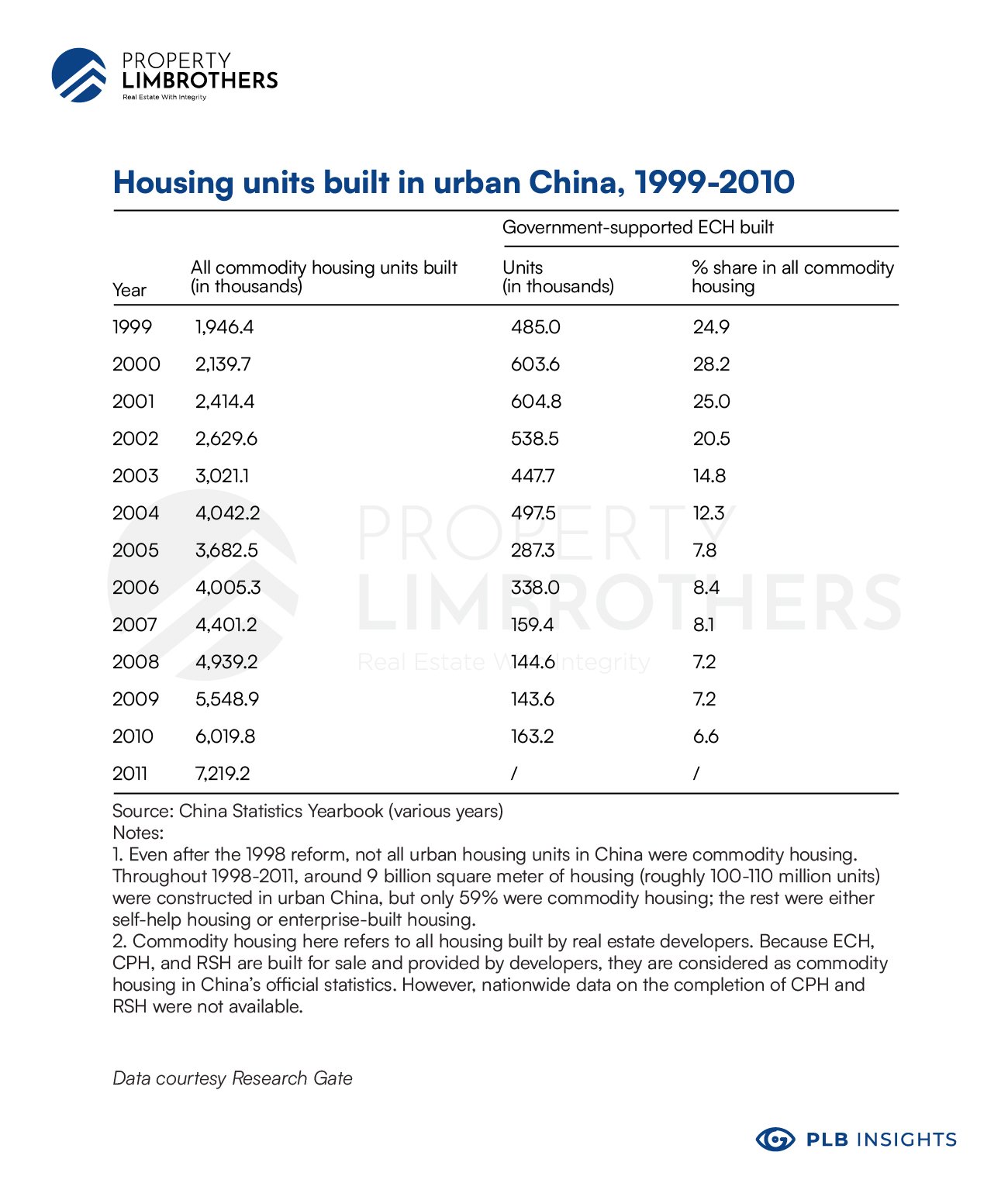 As such, analysts believe that local governments in China are more attracted to the contributions of commercialised real estate. Half of the Chinese cities’ revenues, after all, are derived from land sales and property taxes.

After all, local governance in China may be more inclined to seek quicker rising economic growth statistics (and increasing state revenue) rather than less immediate affordable housing policies that may even have them spending over state budgets.

Where real estate market growth is arguably too prioritised as a housing policy objective, the market has been beginning to deal with a bubble so large that in 2019, prices were found to have quadrupled within the last two decades.

That was three years ago. Evergrande, a real estate company with almost 1,300 projects under its belt, is a testament to a real estate market too focused on growth, crumbling under the weight of aggressive borrowing.

From the almost overtold story of the “Big Short” in the 2007-2008 financial crisis to now the Chinese Housing Crisis. Real estate calamities are not new to the world, problems will always exist, but it is about picking the “better” problem to face.

So let’s take a look at how Singapore has used these case studies in building its cornerstone in Real Estate governance. 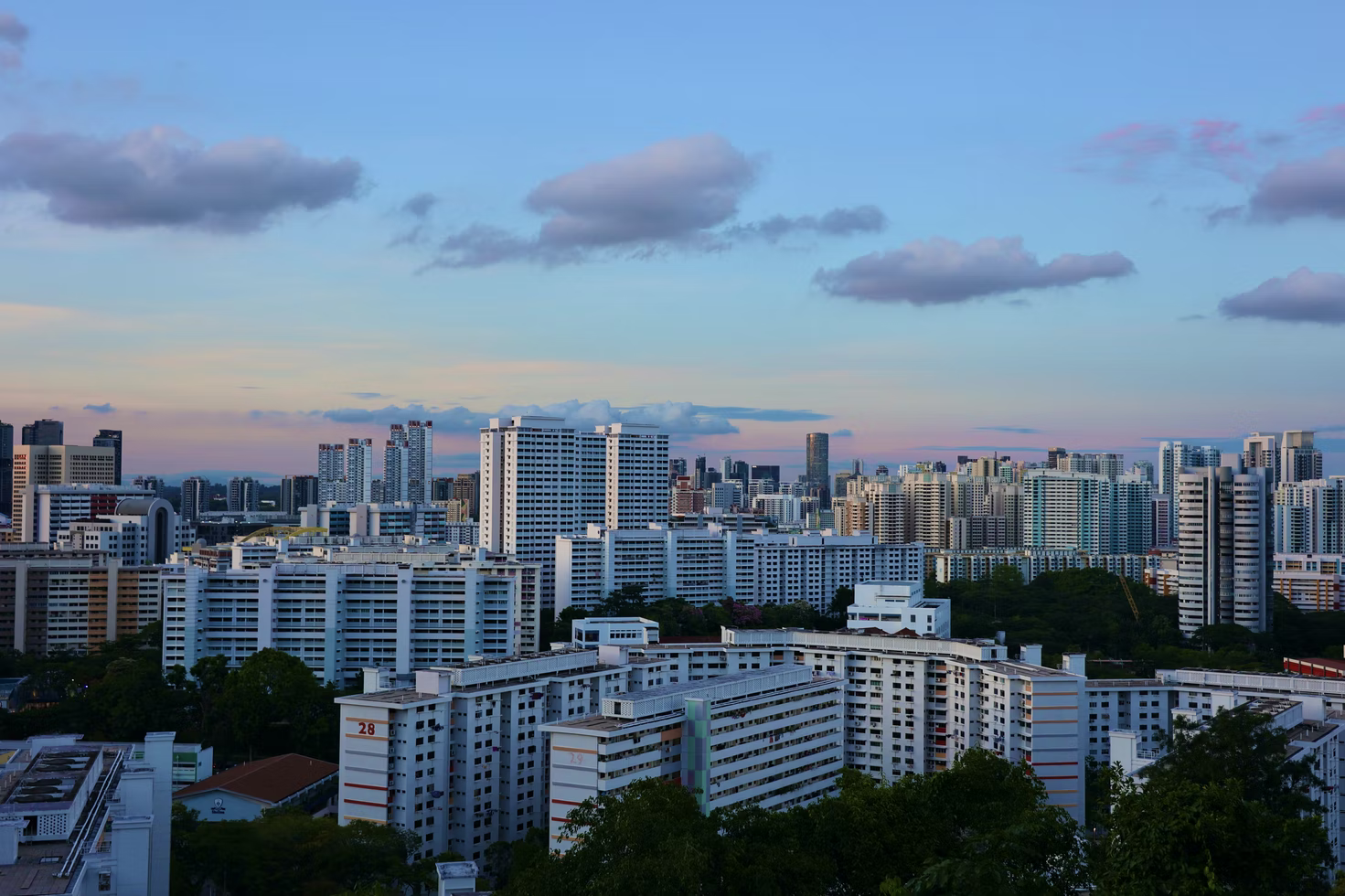 Providing affordable housing for Singapore has remained a top priority for the government.

Historically, through the Housing and Development Board (HDB), the Singaporean government had managed to solve decades of pre-independence overpopulation in dangerously-built kampong villages and brought public housing ownership up from 9% in 1960 to over 75% in the 1980s onwards.

We can safely say that public housing is and remains integral to Singaporean real estate, and so do the regulations surrounding them.

In this section, we will be evaluating the impact of the current Singaporean public housing policy. However, if you would like to have a more detailed history of Singaporean real estate, check out our article on The History of Growth in Singapore’s Real Estate Market.

“Home Ownership for the People” Scheme

Before 1964, households may only rent HDB-built flats. For many families at the time with lower incomes, rental prices were unsustainable. Such a situation left them no choice but to stay in overcrowded, unsanitary kampong villages. 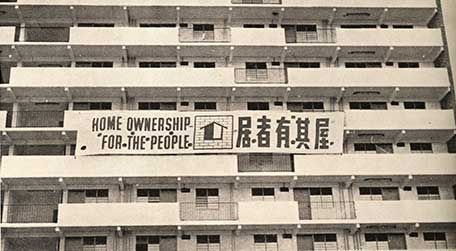 The solution? In 1964, the HDB allowed families with a total monthly income of less than 800 SGD (3496.97 SGD a month, adjusted for 2021 inflation) to provide monthly payments for public housing units at a lower monthly downpayment. HDB flats, in general, were sold below market rates to ensure greater affordability for a more significant percentage of the population.

Initially, the CPF was a mandatory contribution system in preparation for retirement in its establishment in 1955. However, to incentivise greater homeownership after independence, through the Public Housing policy in 1968, individuals and households may now use their CPF to finance their mortgage loans.

This reform aimed to boost homeownership and provide better opportunities for greater retirement security for Singaporeans. They would not have to use their retirement savings for additional rental income.

Singapore, after all, has a small real estate market (to say the very least). Combine this possible land scarcity with the risks of excessive speculative demand, widespread mortgage defaulting; without appropriate regulatory policies, these could have tenfold detrimental effects on Singapore’s public housing and real estate.

Buyers’ stamp duties are no rare phenomenon. Australia, Hong Kong, and the United Kingdom (amongst many other countries) all have stamp duties imposed on property buyers. Singapore is no exception.

However, stamp duties in Singapore are distinguished only by property type and property value. On the other hand, additional Buyers’ Stamp Duties (ABSD) are determined by a buyer’s residency status and property type.

Introduced in December 2011, ABSD was introduced to manage the surge in demand for property, especially from foreign direct investment; bringing back the alignment of Singapore’s Real Estate governance direction – affordable housing for Singaporeans

The ABSD was put in place to manage a growing foreign investors’ participation in the Singaporean real estate market. In contrast, while beneficial to real estate, foreign capital must not be so unregulated that such a market may be open to foreign speculation, jacking up property prices and making homes unaffordable for residents.

In the Singaporean real estate market, there also exists certain risks of speculative buying from its residents. Property flipping is a trend in most countries; one would buy up additional properties (hopefully below market value), ‘flip’ or refurbish them, and then sell them quickly (as recent as months after!) at a profit.

You may flip properties in Singapore, sure – but be sure to fulfil your Minimum Occupation Period (MOP) of five years before selling them. That means physically living in your second or third properties for that MOP period, so no cheating.

The MOP prevents price speculation (more so from residents), especially in sought-after areas in Singapore, such as the Central Area. Should the MOP policy not exist, units may be quickly bought up and sold way higher than their valuations not long after.

The ABSD has been introduced in several rounds: in 2011, 2013, 2018, and more recently, in 2021. These measures are often part and parcel of ‘cooling measures’ to manage a potentially overheated real estate market.

As mentioned in our previous article, The Benefits of Regulation in Singapore, the ABSD was initially a drastic experimental measure that had to be implemented in successive rounds in 2011 and 2013 to manage post-Financial Crisis recovery property overheating.

However, in 2018, the ABSD was implemented not as a cure but as prevention of property overheating.

The ABSD and the MOP are stringent regulations amid an economy as free as Singapore’s. Yet, they have helped bolster its reputation as a haven of stability for real estate investment.

Both China and Singapore’s governments have had different approaches to public housing.

On the other hand, Singapore has been a haven for investors with its lower taxes and freer trade.  However, it refuses to compromise on priority regulations for affordable housing for its citizens, boosting the reputation of Singaporean real estate within Asia, if not globally. This means a slightly higher barrier to entry into the Singaporean market, but could be an edifying feature of the market, qualifying the investors that enter the market, contributing to its overall structural integrity.