Singaporeans have been complaining about crowds for a long, long time. From crowded public transport to crowded malls. The lack of space in some public spaces during peak hours has fostered some sort of a social claustrophobia. Intense competition for great food and limited goods always puts queues at a near unbelievable length.

In the real estate world, it is not uncommon to hear of people not being able to get a decent ballot number for their BTO for years on end. The crowds and competition for space have permeated to living spaces as well. Would Singaporeans care about the spaciousness of their Condominium enclosure? You bet.

In this article, we cover the Landsize Density Effect in PLB’s MOAT Analysis. It basically measures how densely populated the condominium environment is. We will elaborate on why that matters and how we can use the MOAT Analysis.

Why does Landsize Density Matter?

If given a choice between having more space as opposed to less, most rational people would choose the former. Unless you have a thing for crowds, queues, and getting bumped into, city-bumpkins usually want to have more room for personal space. Singaporeans are used to living fast-paced lives, in (arguably) one of the world’s best cities.

High activity levels at work, school, or home, often push us to the upper threshold of our stress levels. If Singaporeans have to compete even for basics like food and living space, we can most certainly expect a more unhappy and unkind Singapore. Competition may be an ideal state for economists focused on getting the “best” outcome, but it is not always the best for human wellbeing.

The lack of personal space, both physical and social, is detrimental to a person’s wellbeing. Without the literal and figurative breathing space, people might find themselves cornered and burnt out from competitive interactions in almost all aspects of their lives. The harm to mental and emotional wellbeing might be understated.

That being said, the primary focus in the search for homes has been on the size of the unit itself. People feel that having more personal space this way is their solution to an uncomfortably cramped Singapore. This might work but it will probably cost individuals and families much more to buy a bigger home.

An aspect of space that homebuyers sometimes miss out on is the population density of the condominium. Properties with a higher density would often see more residents competing for use over facilities. Swimming pools, Tennis courts, Function rooms, Barbeque pits. Imagine having to fight over the bookings for these facilities that you paid for. The higher the density of the property, resources must be shared over a greater number of residents.

So, when you are making a property purchase (especially for your own stay), you need to be aware of what else you’re paying for. It is not just the size of your unit itself that matters alone. It is also the size of the development and the facilities that are available. This is especially true for what we would consider to be typical condominium projects. There are some exceptions to this, such as boutique shoebox apartments, where the focus is not so much on the amenities as it is to have living space in a more central location.

After all is said and done, Landsize Density matters because it will directly affect the quality of life for residents living in that condominium. With more space and availability of amenities for each resident, life will be more pleasant and hopefully more relaxed. This might be a bigger consideration for people considering purchasing a property for their own stay. Since it is not exactly correlated with rental yield per se (for investment purposes), the quality of life factor might not impact the returns on the property investment. But it will contribute to the well-being of residents whether they acknowledge it or not.

How is Landsize Density Measured?

Another way we can think of this construct is to see how much space each resident can have in the entire development. If the entire condominium is a pizza, how many slices can each individual take? That depends on the size of the pizza and the number of people eating it. Going back to the real estate world, it is basically how much space (in square feet) each individual gets from the property.

For high-density properties, each individual gets far less space and a lower score on Landsize Density Effect. The development might be a small project. This might translate to a lack of amenities within the condominium or that it is a very packed development. It comes with pros and cons. Either way, each project has a target customer in mind. In your property search, the MOAT Analysis highlights the key aspects of each property such that you would know if you are that particular customer that will suit and enjoy the property.

For low-density properties, each individual will be able to have more space for themselves. These properties will have a higher score on Landsize Density Effect. Typically this would either mean that the condominium comes with more amenities because of the larger size of the development. Or simply that there are less residents and each of them gets to enjoy more space.

Now let’s jump into how Landsize Density looks like in the MOAT Analysis. We will use some photos of the condominiums to illustrate the difference in the physical aspect of the properties. For comparison purposes, we will look at Regency Park, Cassia View, and Edenz Loft. Landsize Density Effect is intricately related to the other MOAT factors. One can expect bigger developments to generally be more expensive (higher psf), located in a less central location, developed earlier in history, and perhaps have a longer tenure. 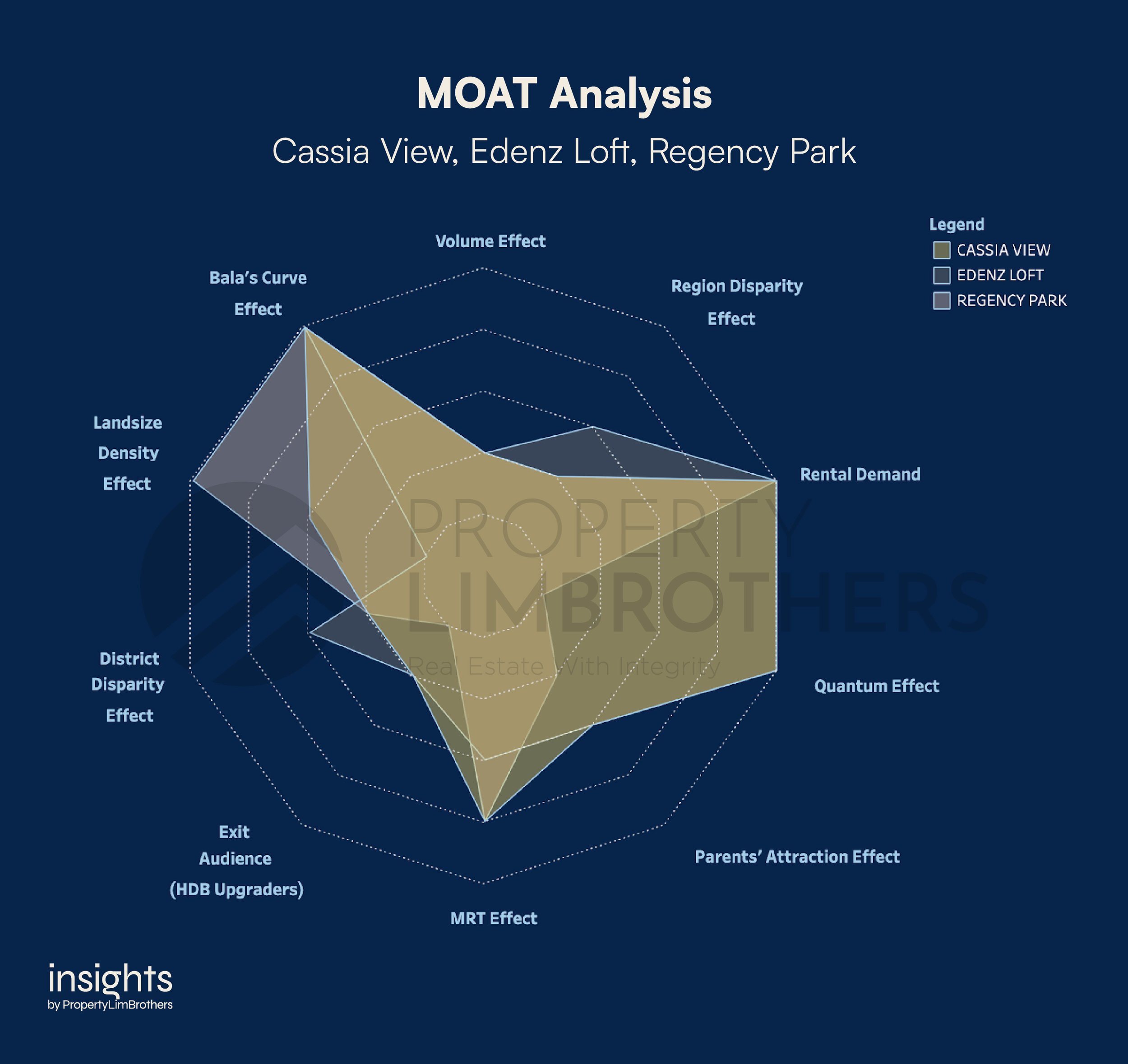 Nonetheless, Landsize Density measures the specific construct of the estate space for each individual. In other words, it is an indirect measure of one’s own-stay quality of life if they were to live in that condominium. The MOAT charts below will give you a good bird’s eye view of each property’s traits, reducing your property search and analysis time by condensing the relevant information in just one image.

The first condominium we will look at for the comparison is Regency Park. It is a freehold condominium located in District 10, Tanglin. It was completed in 1990 with 292 units in total. As a premium condominium selection in a central location with a great amount of breathing space. Each unit in Regency Park has approximately over 1,700 sqft of space in the development for their enjoyment. This lands them a score of 5 on the Landsize Density Effect. 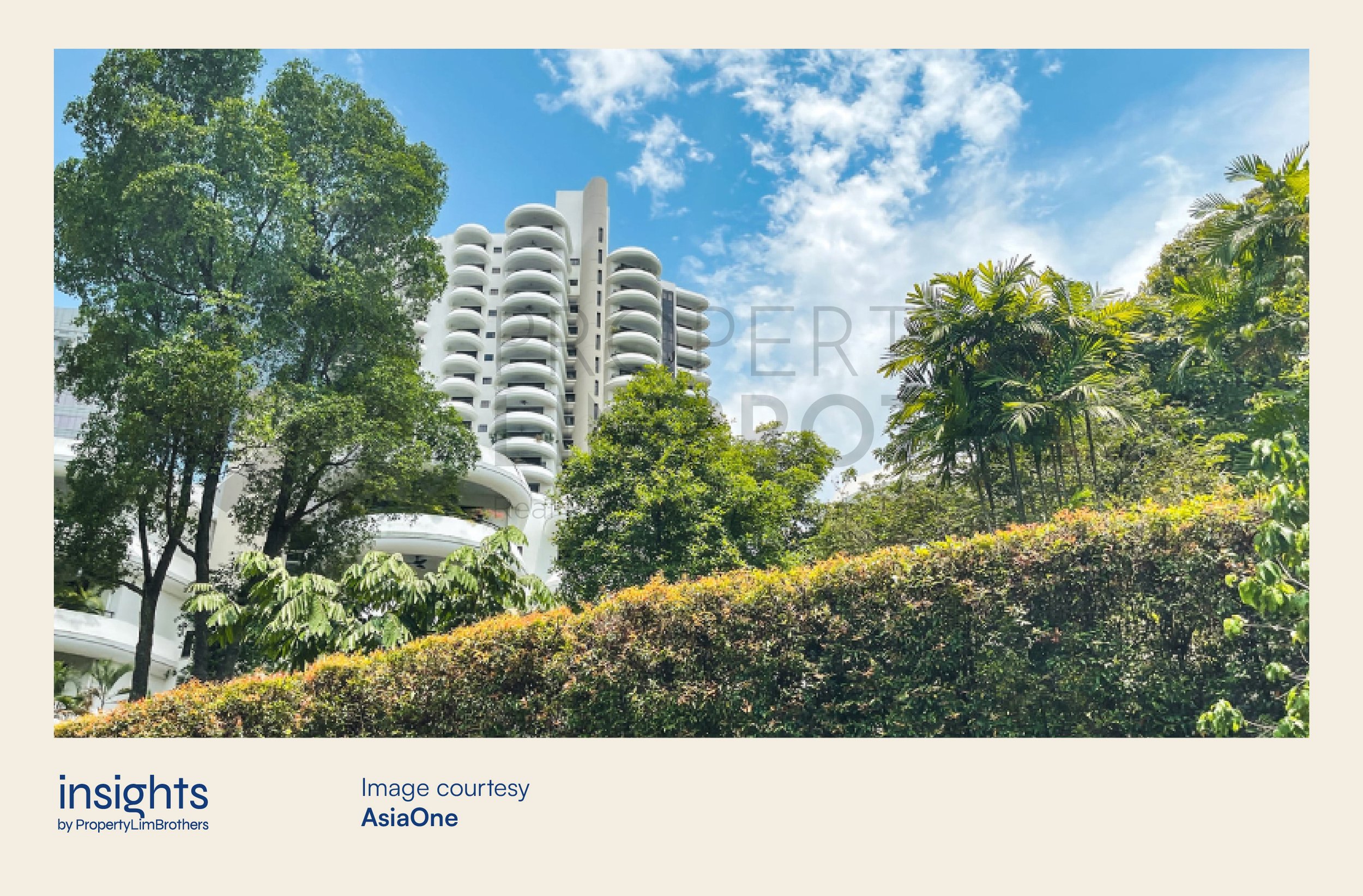 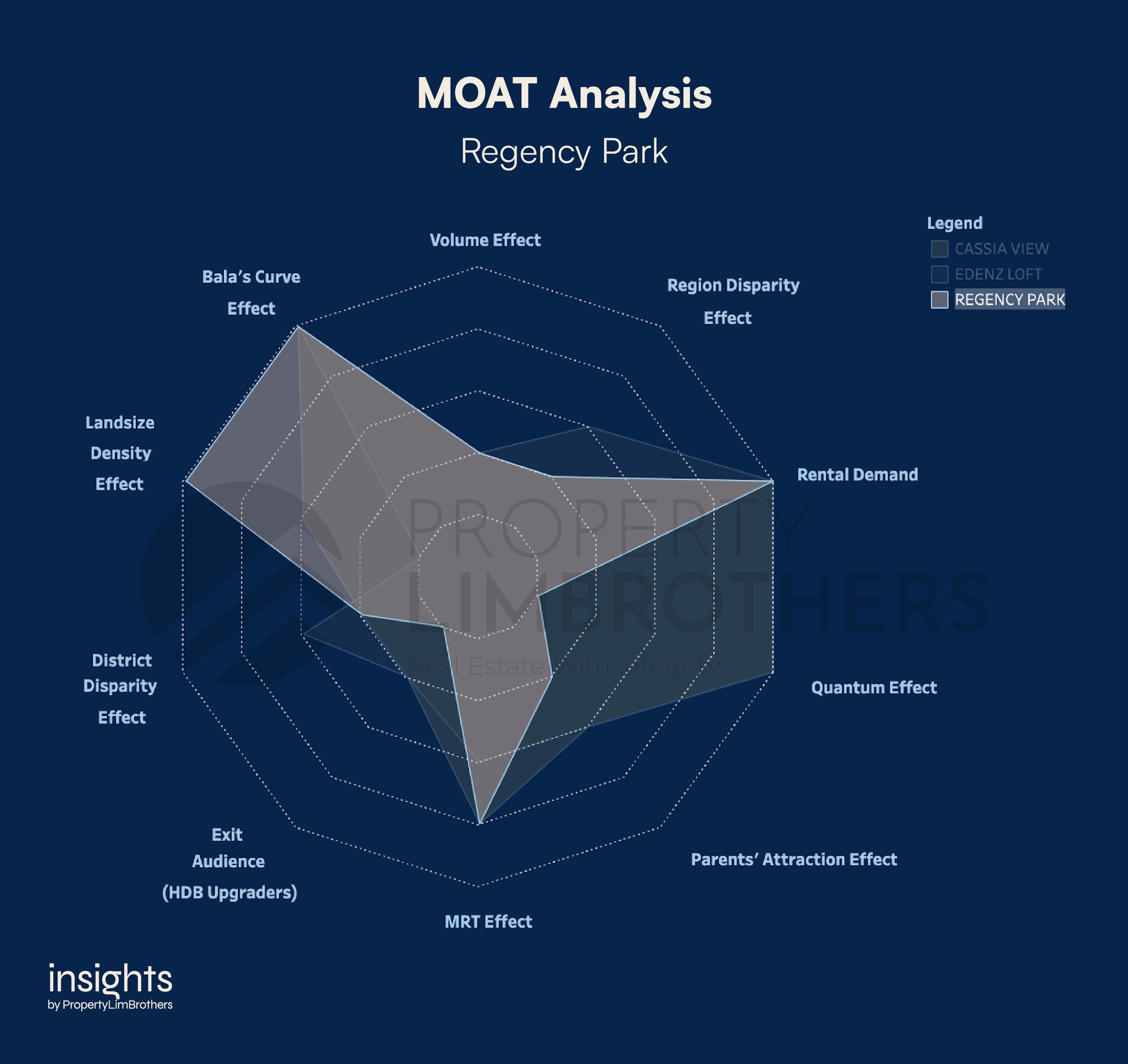 Regency Park also got a score of 5 for Bala’s Curve Effect (since it is freehold) and Rental Demand. It stands at a score of 4 for MRT Effect with Orchard Boulevard MRT station coming up later in 2022. The lower score on volume is understandable because of the relatively small number of units in the development. The premium nature of Regency Park also explains the lower score on Region & District Disparity, Quantum Effect, and Exit Audience.

That being said, these lower scores do not indicate that the property is inherently bad. Rather it tells us a more complete story of the audience that the property caters to. Additional supplementary data suggests a diverse pool of owners with strong foreign investor presence. Further suggesting its appeal to international investors and local high net worth individuals.

We will look at Cassia View next. It is a freehold apartment located along Guillemard Road. Located in District 14, Geylang, it was completed in 1998 with only 72 units. It performs excellently on Bala’s Curve, Rental Demand, and Quantum Effect with a score of 5. This presents a sweet spot as an affordable investment property for rental yield. The freehold nature of the property helps the property to retain and grow its value as an investment. 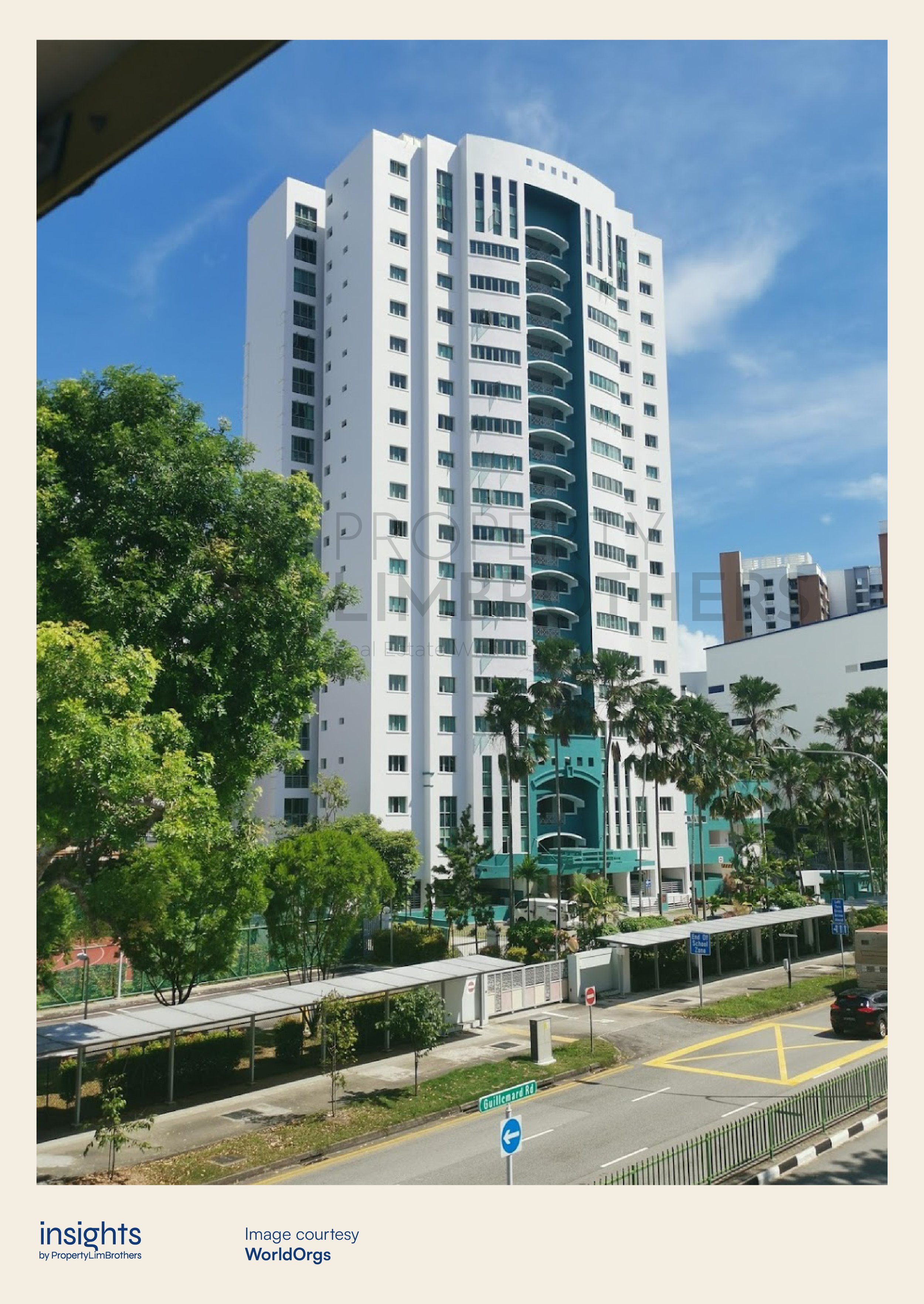 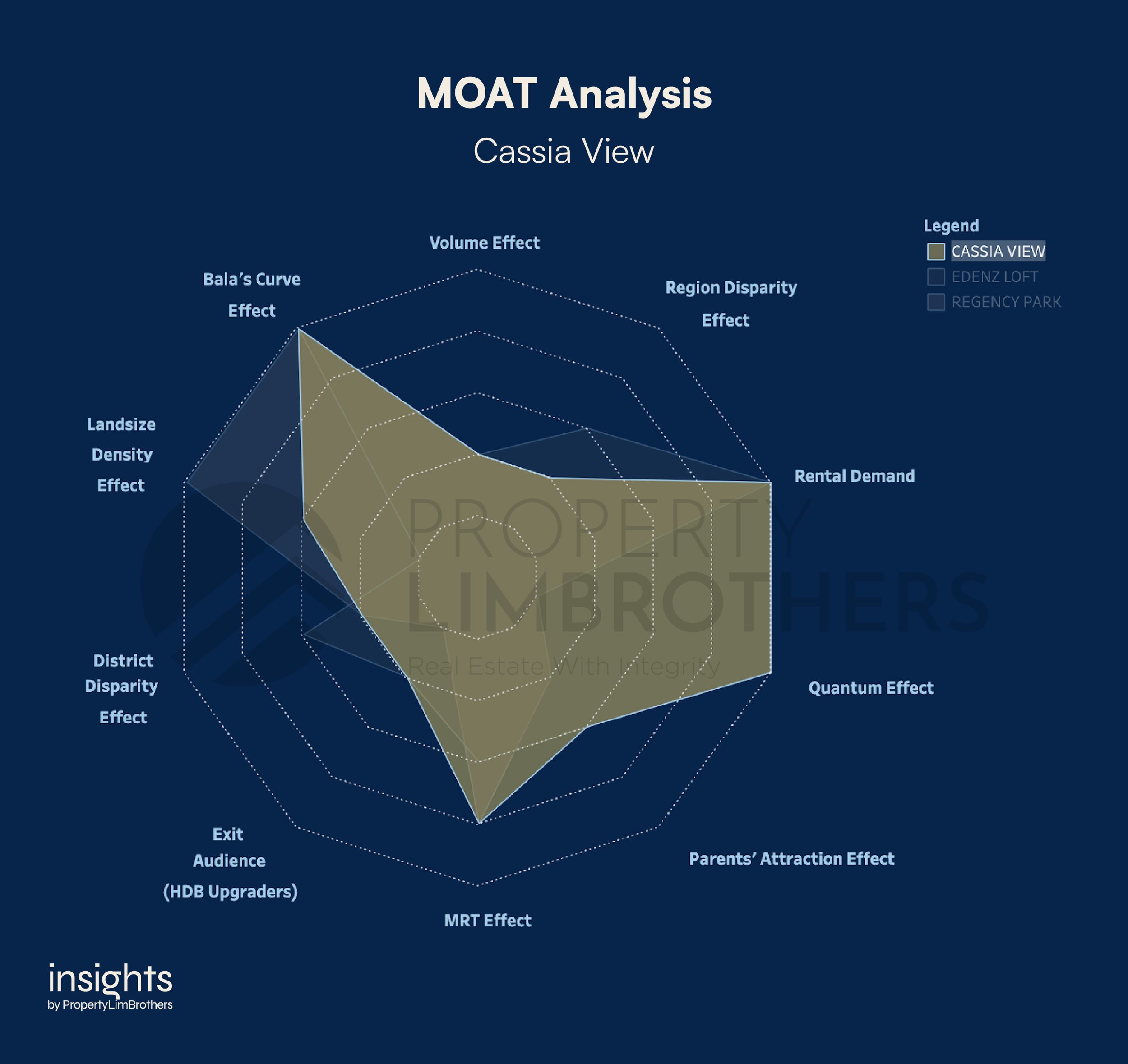 Cassia View has a moderate score of 3 on Landsize Density with slightly less than 500 sqft per unit. This mid-range performance on Landsize Density has helped with the pricing and improved the Quantum Effect score drastically. Thus, buyers should look out for this sort of tradeoff when analysing their options. It is important for buyers to be well acquainted with the tradeoffs they are willing to make, and be sure of what it is they are looking for in a property.

Finally, we arrive at the last condominium in our comparison exercise, Edenz Loft. It is a freehold apartment located in District 14, Geylang. It was completed in 2015 with 42 units. A bulk of the units (82.9%) are small apartments around 400-500 sqft. As its name suggests, it is a hip loft apartment aimed at investors looking for rental yield or singles looking for a bachelor pad. 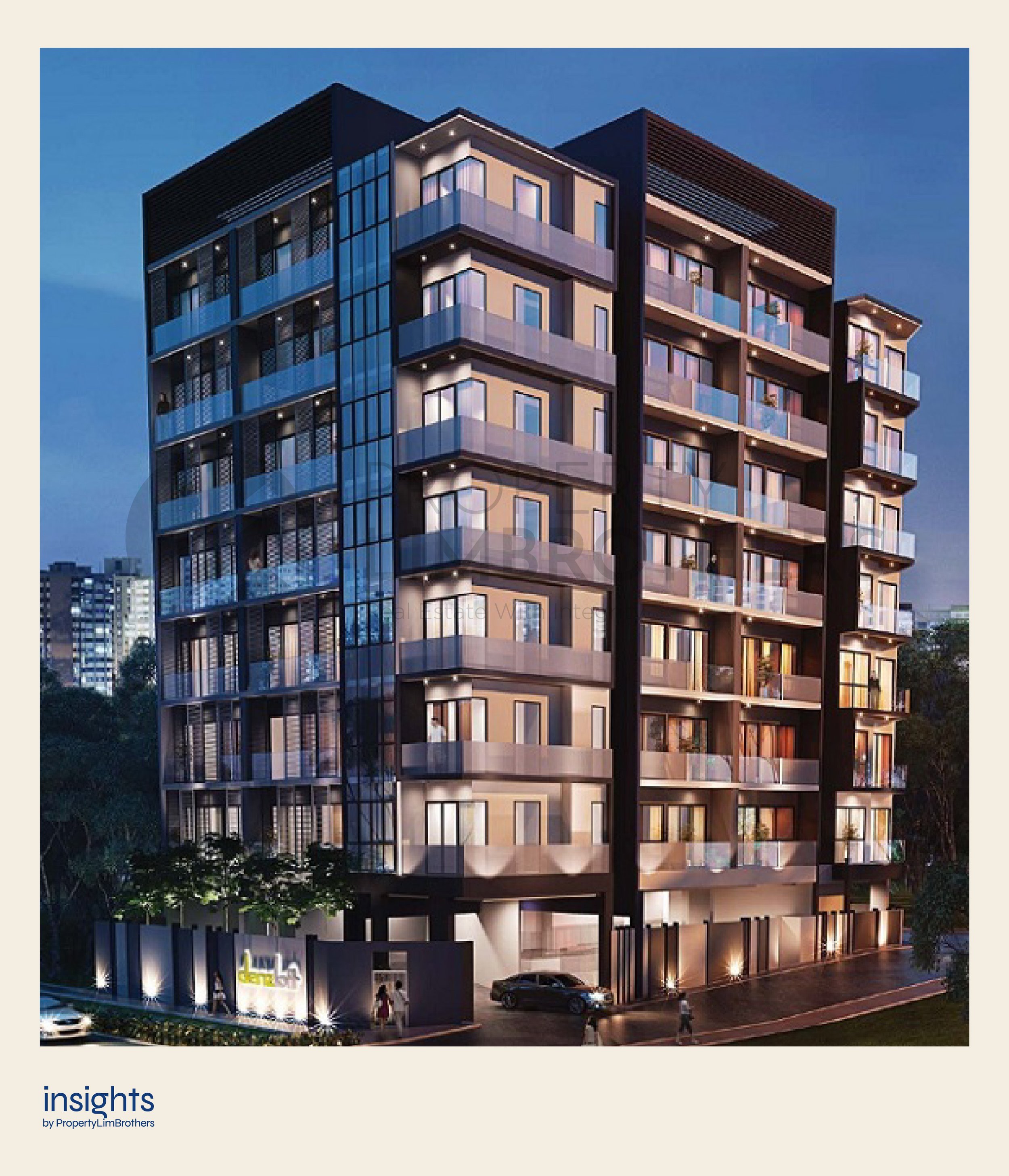 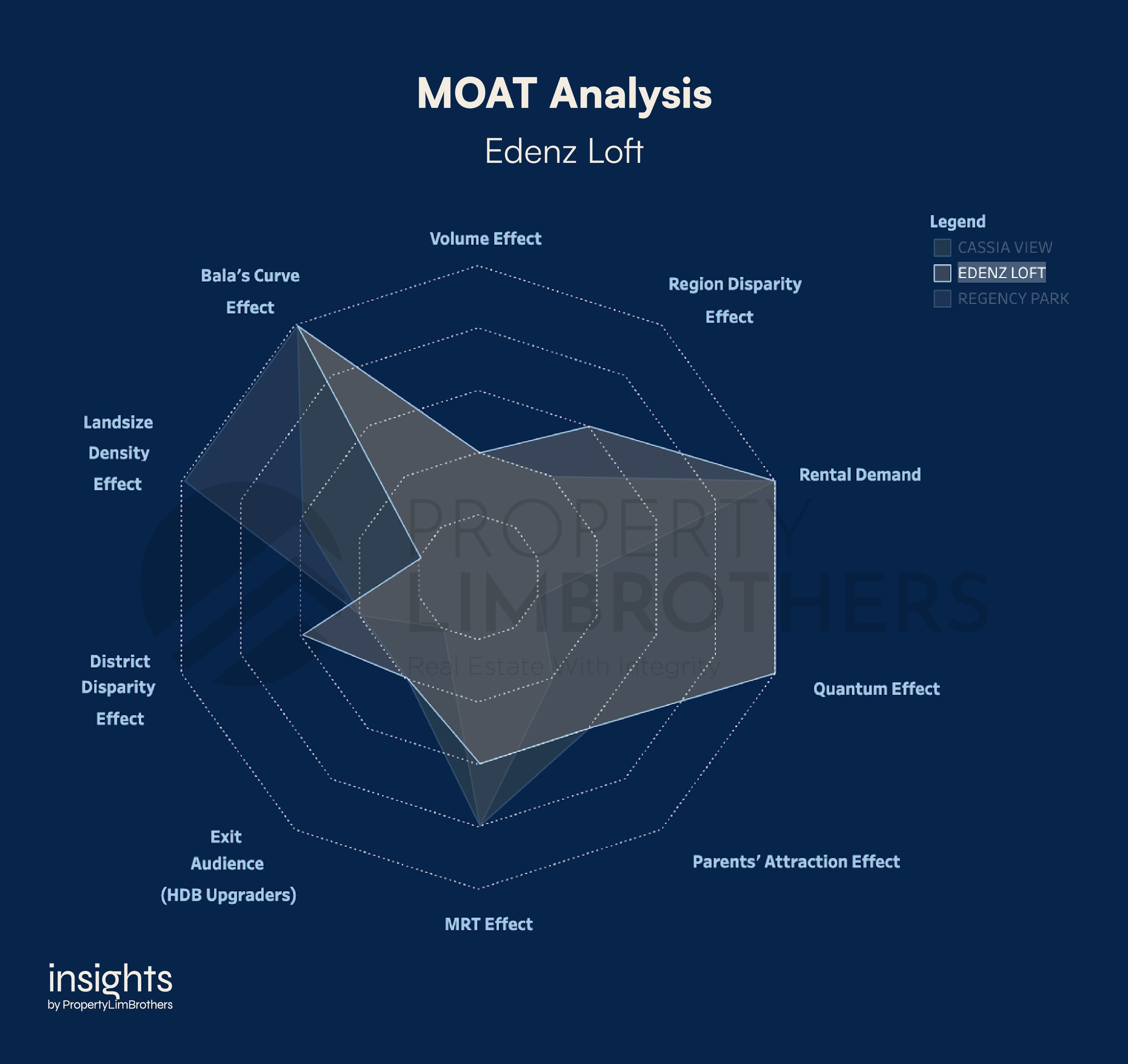 As expected, we see Rental Demand, Quantum Effect, and Bala’s Curve Effect hit the score of 5. In terms of an investment property, Edenz Loft was able to hit the price sweet spot in terms of quantum. Rental Demand for the property is high here because of the development being targeted at investors. This results in a higher rental demand score as a larger portion of the total number of units are likely to be rented.

It is to no surprise that the Landsize Density Effect sits at a score of 1. The development area being shared is a mere 55 sqft per unit. This is probably a huge factor in helping the development achieve the psf sweet spot for investors, since the costs are likely focused on the living spaces rather than on amenities and other lifestyle options.

Through the comparison of Regency Park, Cassia View, and Edenz Loft, it should be clear by now that there is no absolute ideal or one-size-fits-all development. Trade-offs exist between the different factors that give a property its appeal. Each property has an intended target audience. The MOAT Analysis can give you a quick sense of whether the property will appeal to you by giving an efficient summary of the factors that matter when we are considering buying our future home.

Living space is often interpreted by many homebuyers as the space within the property unit itself. While that is the most common way to look at living space, the total enclosure of the condominium also plays an important role in creating the vibe of the property. It is hard to describe in words what the five senses take in when we are in a more open, refreshing, wide space. Thus, looking at the landsize density of the property is vital.

You want to know what you are paying for. This includes the enclosed space in the condominium as well as its facilities. People are looking forward to being able to use the amenities they paid for without having to wait in long queues or compete for space.

If you would like to know more about PLB’s MOAT Analysis and apply it to your own property search, you can reach out to our experts here.