Expect the unexpected, they always say. But, they did not mention to expect new directives being introduced slightly before midnight on the 15th of December 2021. Perhaps the routine of dropping new directives in an instant on new COVID-19 regulations has become a habit. Most would have been asleep while the news were released, but fret not, we are here to cover the details of how the New Property Cooling Measure may affect you.

The difference of every $500 lesser is equivalent to roughly about $100K lesser in loan eligibility. And this is based on TDSR Stress Interest of 3.5%, Loan Tenure 30 years for private properties.

What this means is that for some purchasers, if unable to stretch the loan, the difference could just be between a Top Floor unit and a Lower Floor unit. Example: The highest floor unit in D’Leedon is almost $200K more than the lower floor unit.

For others, it may mean a difference between a renovated unit and a non-renovated unit. But with the renovations cost and delay these days, it might still make more sense to pay forward the $100K even if it means stretching the monthly mortgage a little.

The other cooling measure introduced is the revision of HDB Loan LTV from 90% to 85%. In our opinion this is a good cooling measure that actually benefits consumers more. 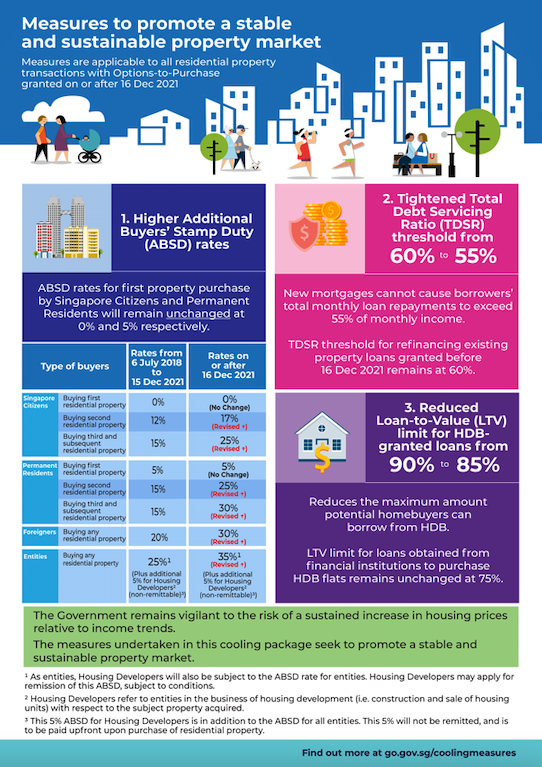 This would be the most significant cooling measure amongst the mix.

The lowest change for ABSD, would be for Singaporean Citizens purchasing a second property. This was more or less expected throughout the year as we have observed rising prices and depleting volumes. This is to help safeguard homeowners who are looking for their own stay properties being priced out of the market. This will also help to stabilize prices in order to avoid this situation.

The most interesting move is the increment of ABSD rates for Entities which affect mostly Housing Developers from 25% to 35%. With En-Bloc fever approaching, this is quite significant. Housing Developers will likely react in one of two ways, either pricing their units competitively, which could potentially push transactional volume upwards.

Or be very critical on the land plots they purchase, which will crunch down on the stock volume, thus some units may have the benefit of being priced higher in order to secure the Sale & Purchase. With available housing stock depleting, it will be quite interesting to see how Housing Developers will react to these new directives.

Another significant increment on the ABSD % is for Foreigners from 20% to 30%, a 10% increment. Again this is in efforts to resolve stock availability issues as developers struggle to meet deadlines for handovers. With multiple projects having been delayed since the start of 2020, along with the depleting land bank of developers. Most are worried of not being able to find a suitable house for themselves.

While that situation is still under control, there seems to be an influx of foreigners purchasing houses in Singapore which has caused the government to take some course of action.

Notice, the increment of 5% for Singapore Citizens purchasing their 2nd property while double the increment of 10% for Foreigners for their 1st property. Our interpretation of these intentions are mainly to deter a large volume of foreigners causing an influx of demand in our local market. Consider it a disparity in reservation fee, almost.

However this increment may have started a new effect before it has even started to deter foreigners. On the contrary, it may not solve stock availability issues but instead amplify it.

Previously the percentage for Singapore Citizen’s ABSD on their 2nd Property was 12% and Foreigners purchasing their first property was 20%. The difference between the two is 8%. Which means, given the same purchase price, the same property, the same conditions. A foreign buyer would likely have to price their property 8% higher when exiting the market than a Singapore Citizen exiting the market for their 2nd property.

To further exemplify this matter. If we are assuming a $1,000,000 purchase price for a Singapore Citizen on their 2nd property which totals to $1,120,000 after ABSD. A foreign owner would have to exit $80,000 higher at $1,200,000 in order to breakeven. For the extra 8% in profit in this scenario, most might still be a little apprehensive to take this investment avenue.

Fast forward to 16th December 2021, the current ABSD % for Singapore Citizens is at 17% for 2nd and subsequent properties and Foreigners purchasing their first property is 30%. The significance between these numbers are not the incremental jump of 5% and 10% respectively. It is the further disparity between the two groups. The difference between the two groups now is at 13%. Which means, assuming the same conditions mentioned above, the instant potential upside is 13% as compared to the previous 8%. The addition of 5% gain based on the disparity between a Singapore Citizen buying a 2nd and Subsequent property versus a Foreigner purchasing their first property, could have the adverse effect of incentivising those with spare cash to explore this route of investment. When that happens, prices may start to creep upwards. Albeit the percentage of those who prefer this method would be small, since you will essentially pay tax which is not exactly recoverable and is cash that could be better utilised. This portrayal has just shown the possibilities even if you had to pay ABSD in the current environment.

What about investors with a free name? Or couples who have de-coupled?

We’d expect that the popularity for housing as an investment vehicle in the current environment to still hold steady. Considering the stellar performance over the last 2 years. Especially so with the current volatile equity market that is experiencing a minor correction, more could be turning towards Real Estate just to explore some interest.

December 2021 is a very interesting one indeed. This method entirely eradicated the opportunity for snaking queues outside showflats in hopes for last minute hauls to avoid the new directives. However as we have depicted in the several examples we have quoted above, we do not foresee a drastic effect on the holistic market. But we do expect some to be more prudent in their purchase as the new directives help curb rising Debt concerns by MAS. Do keep a lookout for that upcoming article where we explore the concerns raised by MAS Managing Director, Mr Menon.

We do not feel that the 5% drop in TDSR has a huge impact on private home buyers as most are already used to the 60% TDSR since 2013 June. For more information on this topic, do watch the latest Nuggets On The Go Episode where we explained the drastic impact of the 2013 TDSR in detail.

As for the component on ABSD, we’d expect the market to have a tepid reaction as most buyers in the current market are looking to purchase their first property or in the midst of exiting their matrimonial home and transiting to another. Or even purchasers with no current properties under their names. And lastly, for HDB purchasers, there is still the option for a bank loan, which has a lower interest rate than a HDB Loan. There are also grant components to help purchasers with their down payment even if they are looking to take a HDB Loan. With all these mentioned, we are pivoting towards an optimistic view ahead of 2022.

If you have further questions on this topic or require some guidance forward on your Real Estate journey, feel free to contact us. Our consultants would be more than to offer their services. Till our next article, take care!