A quick ask on what Singaporeans are proud of, and we guarantee the word “food” would be thrown around. However, how many acclaimed national dishes are truly ours to claim? Don’t get us wrong, if we could, we would shamelessly vie for any dish that is locally renowned and selfishly call it ours. But that would only stir further tension in the many ongoing debates with Malaysia over the legitimacy of our dish assertions. With heavy similarities between the two nations’ food, it is no wonder the line of distinction can be quite blurred. Yet, there is one food we, as Singaporeans, confidently know embodies the clear line, and that is the Singapore Sling.

Even down to its name, the cocktail is essentially untouchable in the food debate. Locally mixed and found, Singapore Sling is the signature beverage of Raffles Hotel and even regarded as the national drink of Singapore. How much more Singaporean can it get? In celebration of Singapore’s 57th Birthday, this article will use the Singapore Sling as a lens to explore the Hainanese enclave of Beach Road and how its past infrastructure influenced modern urban development. 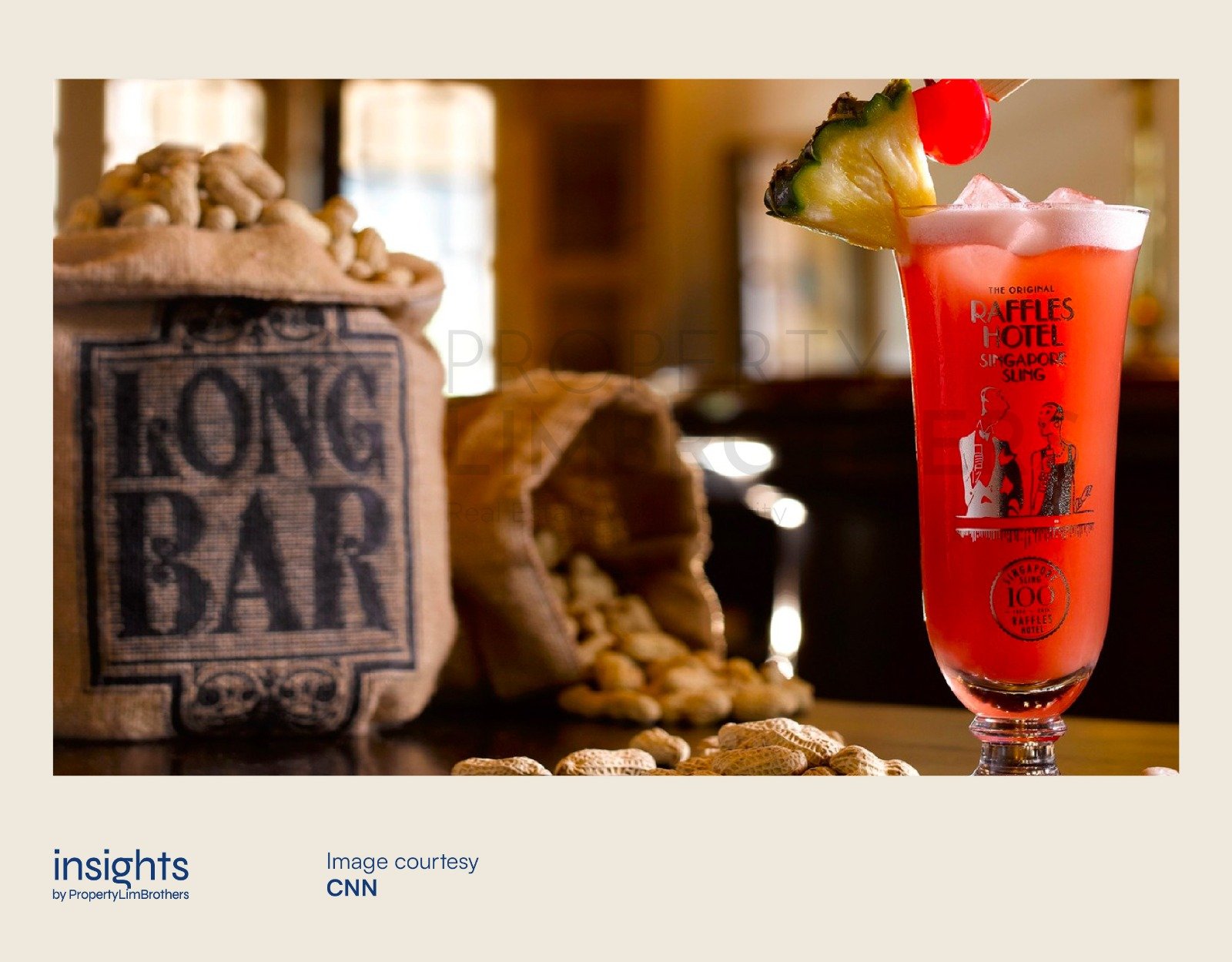 Manifested in the Long Bar of Raffles Hotel, Singapore Sling is a primarily gin-based cocktail, typically shaken with pineapple juice, lime juice, curaçao, Bénédictine, grenadine and cherry liqueur. Although it has many conflicting origin stories, they all point to a Hainanese bartender, Ngiam Tong Boon, as the drink’s creator. 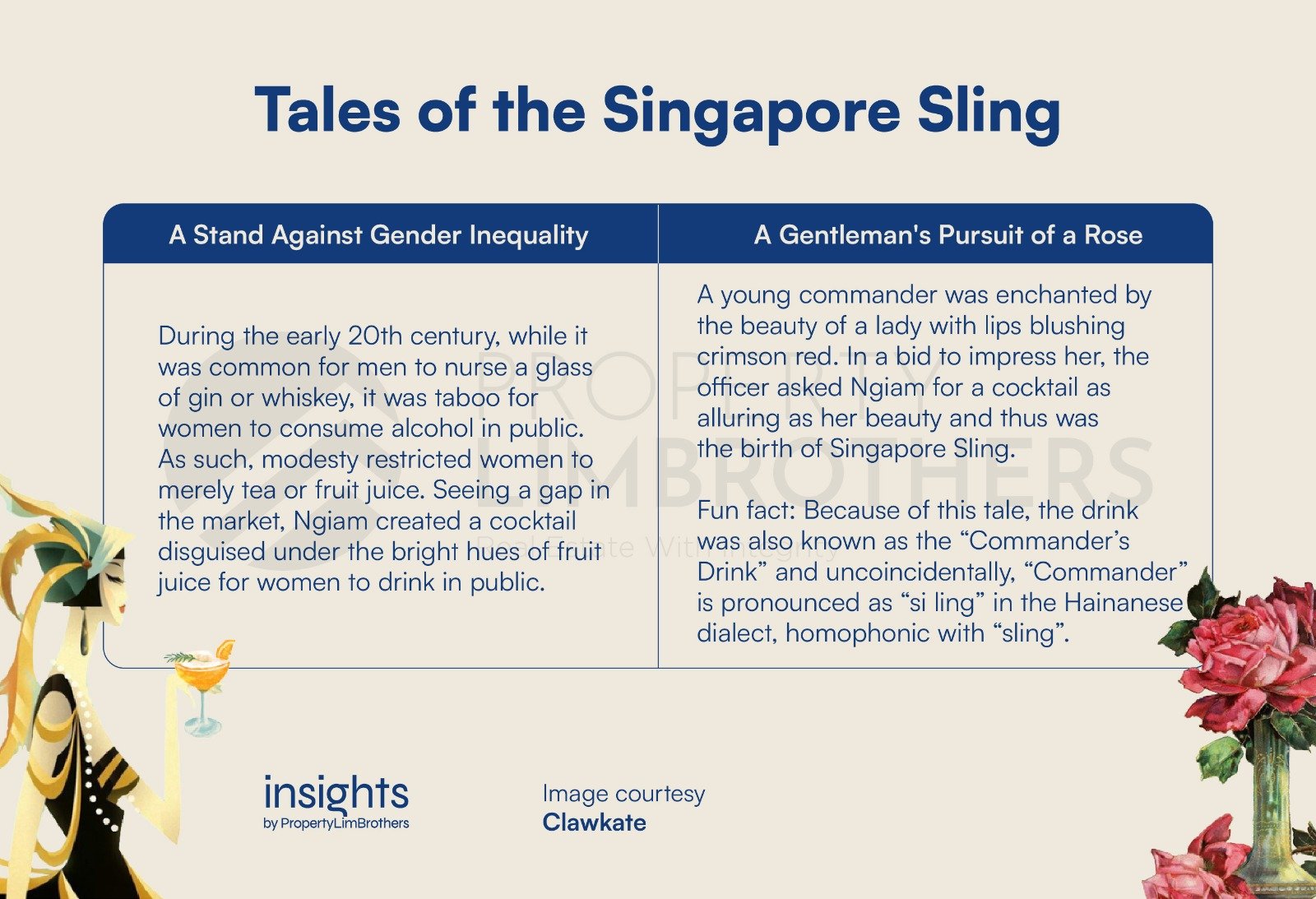 But this famed Hainanese bartender who shook and strained alcohol into fancy glasses at Raffles Hotel is not exactly why Beach Road is termed ‘Little Hainan’. As a matter of fact, Raffles Hotel was not heavily patronised by Hainanese back in the day. Instead, the hotel’s main financial backers were wealthy plantation owners of European descent; which is also why the hotel earned the name ‘Rendezvous of Planters’. So then, what is the relation between Beach Road and it being a Hainanese Enclave?

Hainanese Enclave in the Midst of ‘European Town’

“Beach Road” and “Hainanese Enclave” were not an immediate association. In fact, Raffles Hotel sits on the eastern edge of what was known as ‘European Town’. Envisioned by Sir Stamford Raffles in the Jackson Plan, the land of downtown Singapore was meant to be racially divided to organise the multi-racial society of then. While Chinese were allocated Telok Ayer (where Chinatown stands today), Europeans occupied Beach Road. 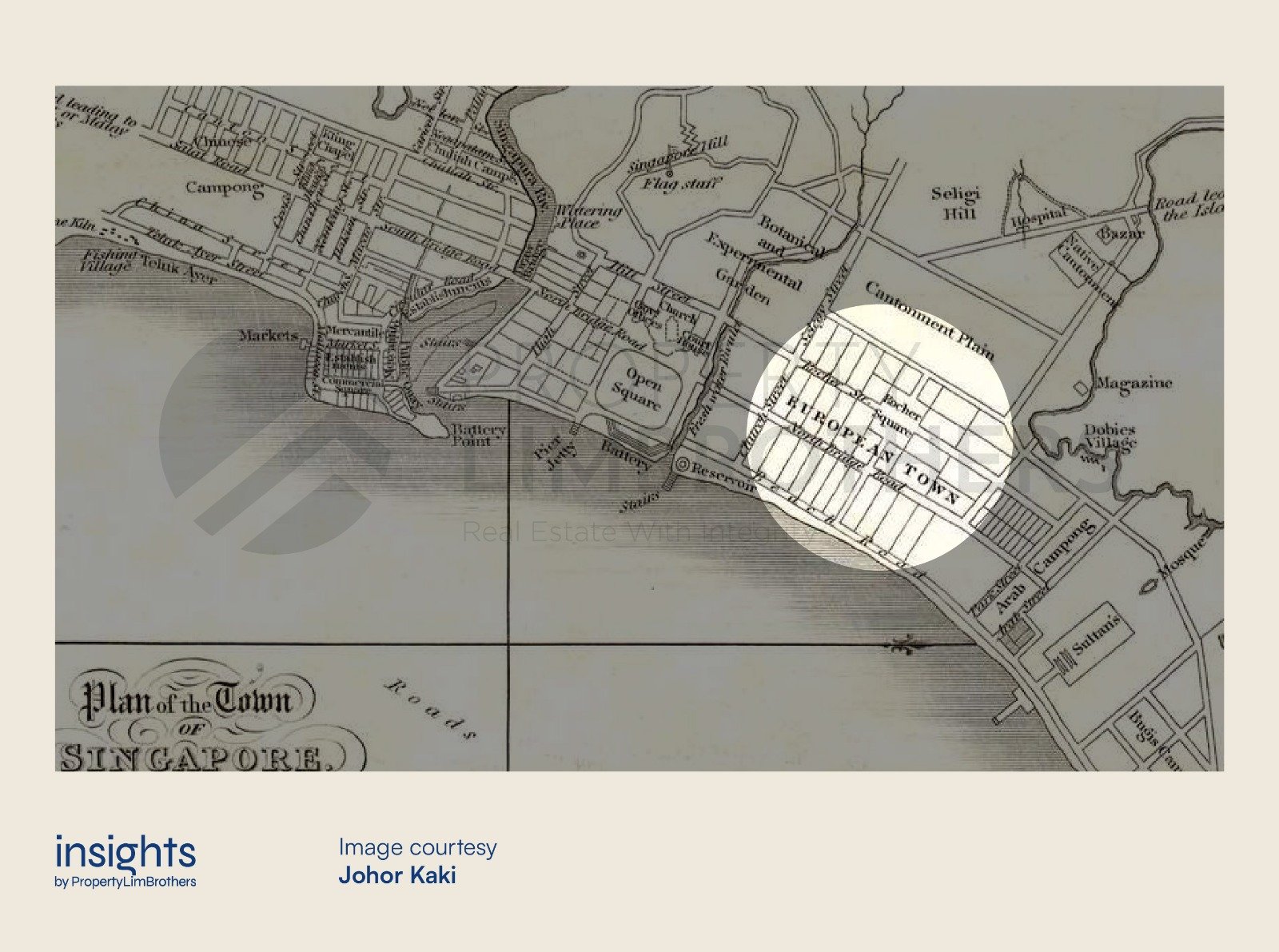 However the exclusivity did not last long. After the late opening of Haikou port in Hainan, an influx of Hainanese immigrants began to occupy the coast of Singapore near Beach Road. Settling much later than the other Chinese provincial groups, there was no longer any living or commercial space for the Hainanese to thrive along the West of Singapore River. They thus populated the area of Beach Road, edging Europeans out of ‘European Town’.

The prestigious seaside villas initially meant to house businessmen were repurposed into shophouses, hostels and food places to cater to the major increase in Chinese immigrants in the district. Eventually, Seah Street, Purvis Street, and Middle Road became inhabited by Hainanese merchants and coolies instead of wealthy plantation owners.

The Hainanese community had to struggle against competitive odds to form their own enclave and specialise in a trade that other Chinese communities had not already dominated. They had to adapt to the demand of the area and took on jobs like domestic servants, cooks and bartenders for the European community. Their niche in food is also the reason why Hainanese cuisine soared and proliferated throughout Singapore, and especially concentrated along Beach Road. Perhaps it is also no coincidence that both our regarded national food (Hainanese chicken rice) and drink (Singapore Sling) are both rooted in Hainanese culture.

Developing Beach Road Beyond and Above Little Hainan 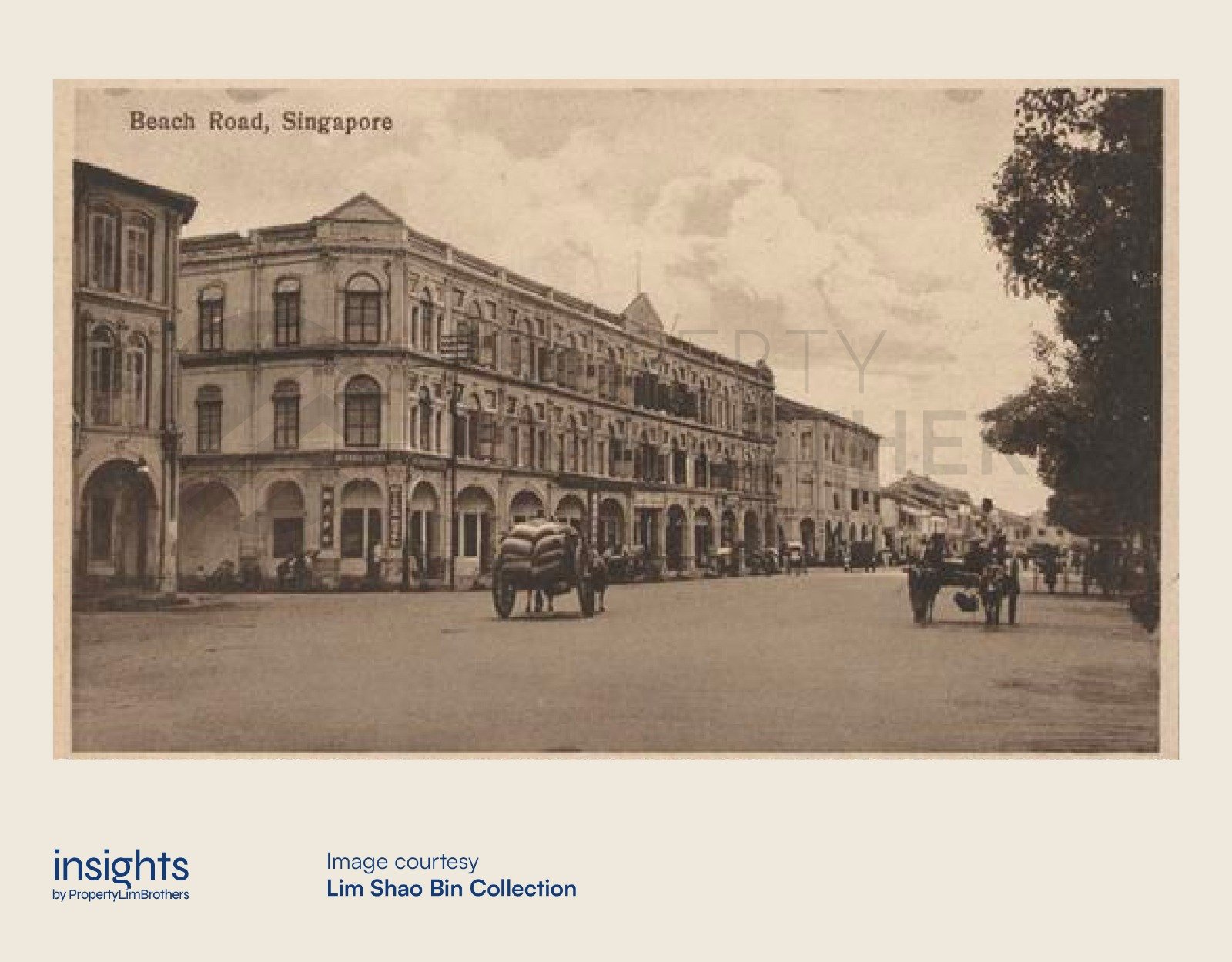 Today, some of the shophouses that sheltered these hardworking Hainanese are still preserved and uncoincidentally used as eateries. From decades old Hainanese chicken rice to Hainanese confectioneries, Beach Road still holds them dearly, giving its diners a blast from the past and the nearby residents a fulfilling meal.

Although not all shophouses survived the redevelopment of Beach Road, the land on this stretch came to host more high-rise apartments to house more people. In the recent decade, Beach Road has seen many new skyscrapers, be it commercial, residential or even both in one. South Beach Residences and Duo Residences are two examples of some of the prime mixed-use properties in the district. 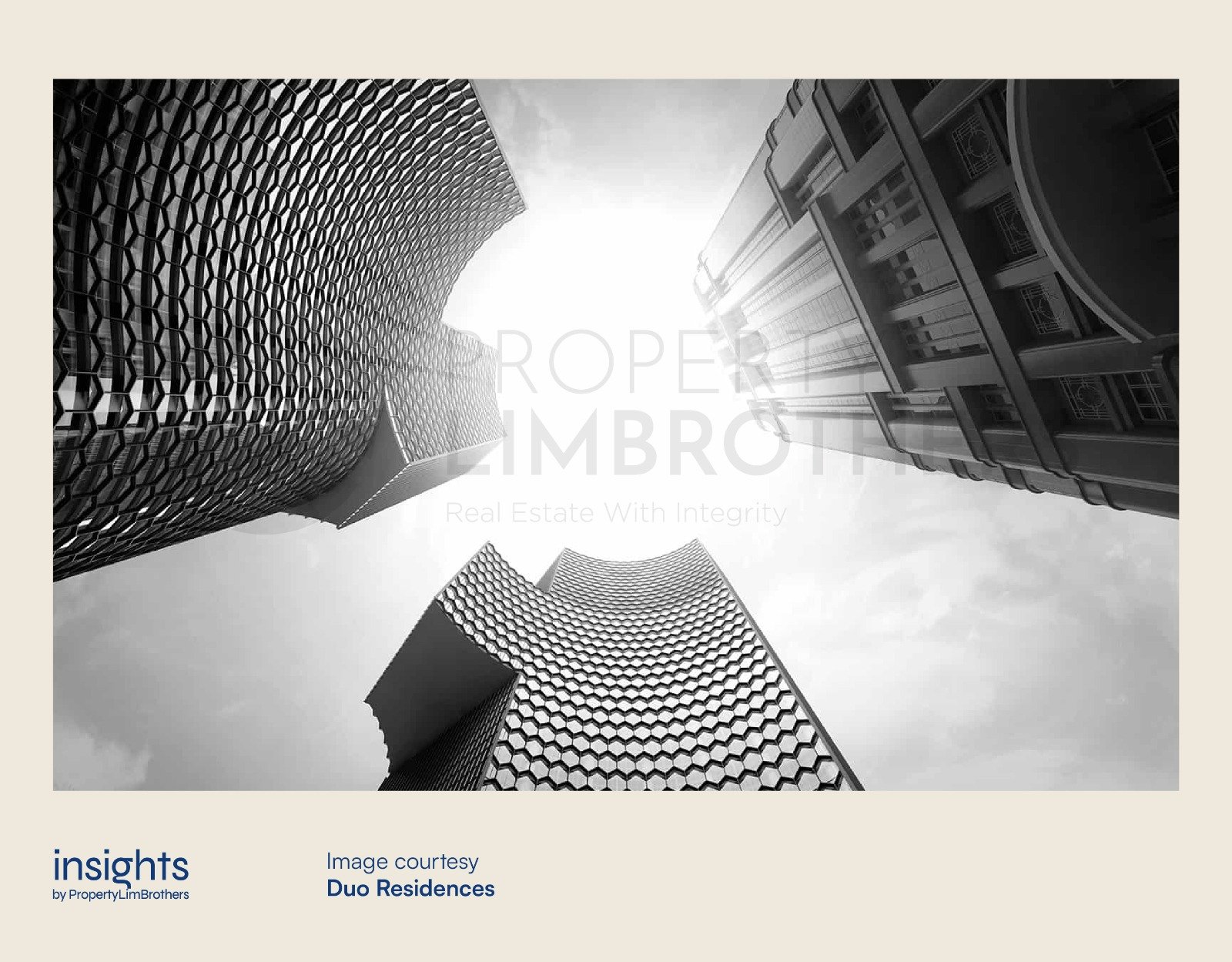 Perhaps paying homage to Beach Road’s precedence as an ‘all-in-one’ district for its Hainanese residents back then, South Beach Residences and Duo Residences likewise catered this convenience to its current homeowners. Shopping malls such as Bugis Junction and Suntec City with plenty of restaurants and supermarkets are just around the corner, and the Central Business District (CBD) is easily within reach. These residences essentially mimic the integrated district serving the Hainanese community a century ago where eat and work are contained in the same location.

As if it could not get any more convenient, both South Beach Residences and Duo Residences are directly connected to MRT stations, saving you the hassle of walking under the sweltering sun or challenging the storm. The interconnectivity makes the properties in this area extremely attractive for those who frequent public transportations. On the other hand, if you prefer driving, both properties are a street or two away from Nicoll Highway, ensuring you a fast journey into or out of the CBD.

However, as much as Beach Road is perfect for those seeking a buzz from the amenity-rich central or CBD busy bees, this place may not be as ideal for families with children. With a lack of primary and secondary schools within the radar, Beach Road may not be the best place for you to build your nest. Nevertheless, because of the interconnectedness of Beach Road, even if your child’s school is outside the district, it would not be difficult to reach.

Beach Road has transformed from the food haven of Little Hainan to an inclusive residential area with more to come along. Not forgetting the upcoming developments of Midtown Bay, The M, Midtown Modern and the future of Shaw Tower, Beach Road is surely one to look forward to. Yet despite the many modern infrastructure in the area, reminiscences of the past are embraced within the many traditional eateries, paying homage to its Hainanese roots.

We hope this article has reminded you of the heritage-rich streets of Beach Road and the rejuvenation of convenience it has become. If the homes along Beach Road appeal to you, feel free to reach out to us. Till our next trip down memory lane~ Happy Birthday Singapore!