What are the Mortgage Loans on offer?

There are two types of mortgage loans offered to potential homebuyers: fixed-rate and floating-rate packages. Fixed-rate packages are more straightforward; as the name suggests, these packages provide a constant interest rate as determined by a reference rate, like a bank’s fixed deposit rate.

What are Floating Interest Packages?

Floating-rate packages are a little more tricky. Unlike the former, these packages offer changeable interest rates pegged to specific financial benchmarks in the money market. Because of their variable nature, these rates are what we call floating interest bank rates!

As such, we will be diving deep into what makes floating interest bank rates: who determines them, what drives them, and how they could work for a property investor like you.

As mentioned earlier, floating interest bank rates, as their name suggests, are adjusted periodically according to an overall lending benchmark or speculations on overall changes in the market they are lending to – in this case, in real estate.

Essentially, these rates are ‘floating’ on overall forces on either the direct money market, or more indirectly, the real estate market at large (as banks adjust rates through speculation on where such a market would go).

We will be discussing at length about the types of floating interest bank rates that banks in Singapore have been using (or have been using) for years.

They are the following:

Hopefully this article can give comparison to your current plan and thus help decide on your next interest rate package!

Board rates have been traditionally used to derive a bank’s mortgage interest rates. A bank’s board rate, as the name suggests, is determined internally.

A floating-rate packaged mortgage loan based on a bank’s board rates will seem attractive to potential homebuyers as they do not change or fluctuate as frequently as other floating interest bank rates.

While other rates such as SOR, SIBOR and SORA – determined by more volatile money market movements – fluctuate much more frequently (these rates fluctuate daily, as a matter of fact), a bank’s board rates, on the other hand, change every quarter at most.

While banks are technically allowed to adjust board rates as they wish, these rates do not fluctuate as much to keep confidence from potential clients high: if a bank’s board rate is at, say, 1.5%, you can (in most cases) be assured that it would remain that way for a few months.

One huge drawback that may discourage homebuyers from taking on a board-rate based mortgage loan is the lack of transparency.

Board rates are determined by neither your average mortgage broker, nor their direct supervisors, but by superiors high up in the bank’s organisational management.

This means that although board rates are a more stable benchmark for mortgage loan packages as compared to floating interest rate packages pegged to other financial benchmarks. Neither the client nor the broker may have sufficient knowledge to speculate as to which direction a bank’s board rates may be headed (aside from perhaps, global interest rates).

In addition, banks are only obliged to give their clients 30 days’ notice to change their board rates. That’s not very pleasant news for your financial plans, now is it?

As such, in recent times, SOR and SIBOR (and much more recently, SORA, in light of certain external financial developments) have become more popular benchmarks for floating-interest mortgage loans in Singapore.

Let’s look at another type of floating interest bank rate used in mortgage loans: the Singapore Swap Offer Rate (SOR). The SOR is derived from external indices rather than using internal speculation amongst higher management in a bank.

According to the Association of Banks in Singapore’s (ABS) official website, the SOR is calculated using the volume-weighted average rate of USD/SGD swap transactions (through the United States Dollar London Interbank Offer Rate, or USD LIBOR).

In layman terms, SOR is the cost of obtaining SGD by first borrowing USD, and then swapping this for SGD through a foreign exchange.

As Singapore has been and will remain a global financial hub, with many international financial institutions setting up shop in the country, the SOR was put into place to account for USD/SGD swap transactions (which are much more commonplace in Singapore).

SOR-based mortgage loans may remain attractive in the short term, especially when SOR rates are lower than SIBOR rates. For comparison, at the time of writing (January 2021), the 3-month SOR rate remains at 0.19%, while its cousin, the 3-month SIBOR rate, is higher at 0.41%.

This is especially so when the global economy may be rather slumped, confidence low and loans not as attractive as before – sound familiar?

This would mean less participation in the money market – especially with swap transfers – and therefore, a greater tendency for a lower SOR than SIBOR, which derives its numbers from more localised interest rates given by banks to each other (and therefore may not be as affected by economic slumps).

A more detailed graph of the SOR and SIBOR rates may be found below! 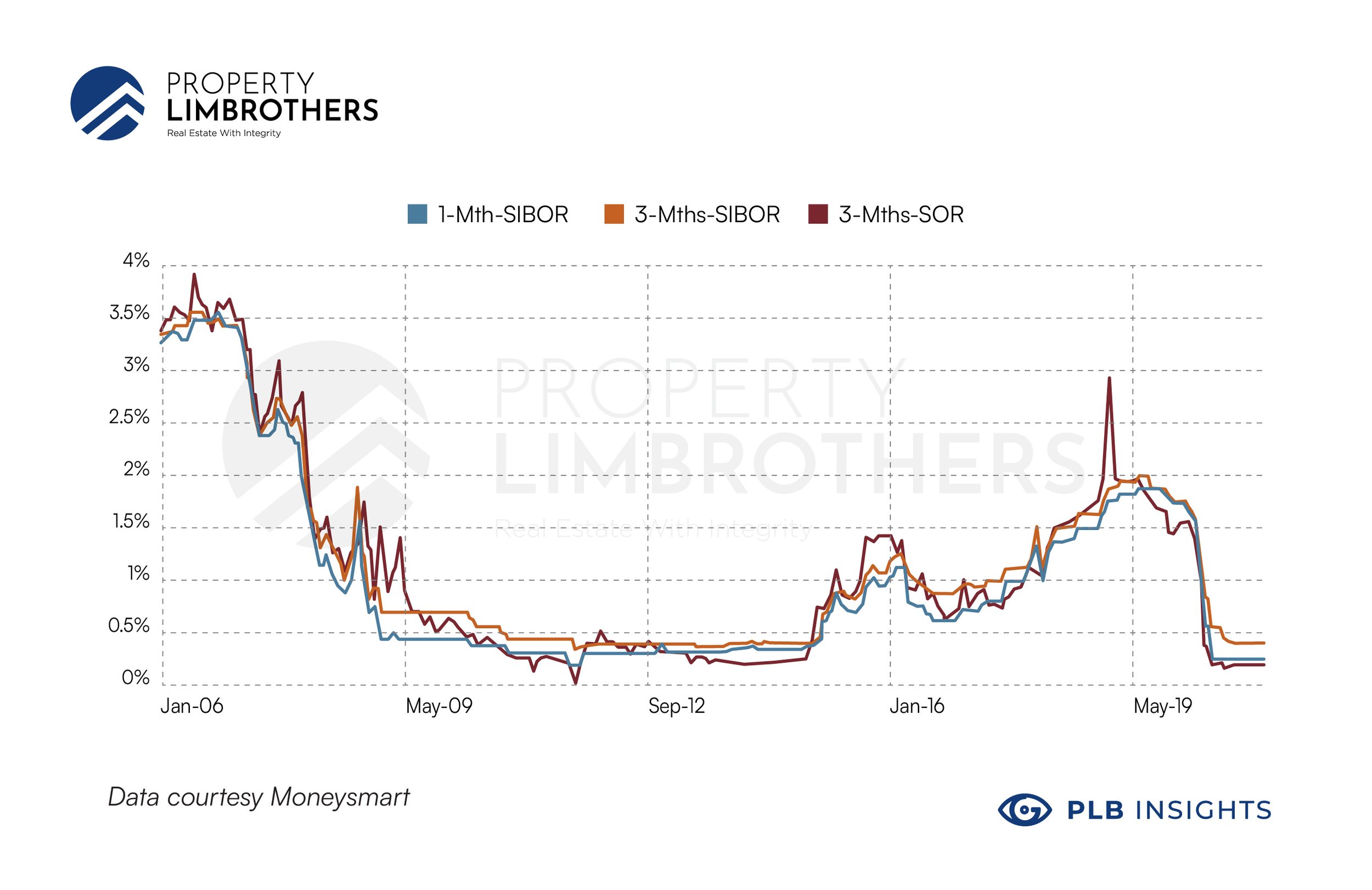 The SOR may not be as attractive if you’re looking for a longer-term floating mortgage loan. With reference to the aforementioned graph shown above, one could notice that the 3-month SOR fluctuates greater than the 3-month and 1-month SIBOR. Why is this so?

As such, SOR-pegged home loans have been completely phased out from the market.

In July 2017, ABS has even announced that it will gradually shift away from using SOR as a lending benchmark as early as 2019, especially in light of the USD LIBOR no longer being used to price new loans after the end of and021.

But if you’re very determined to take on a SOR-based loan, you may still do so as a business entity through a commercial loan. So while you may not get a SOR-based loan for a home, you may be able to get one for a new office building.

A summarised table of the benefits and drawbacks of SOR may be found below: 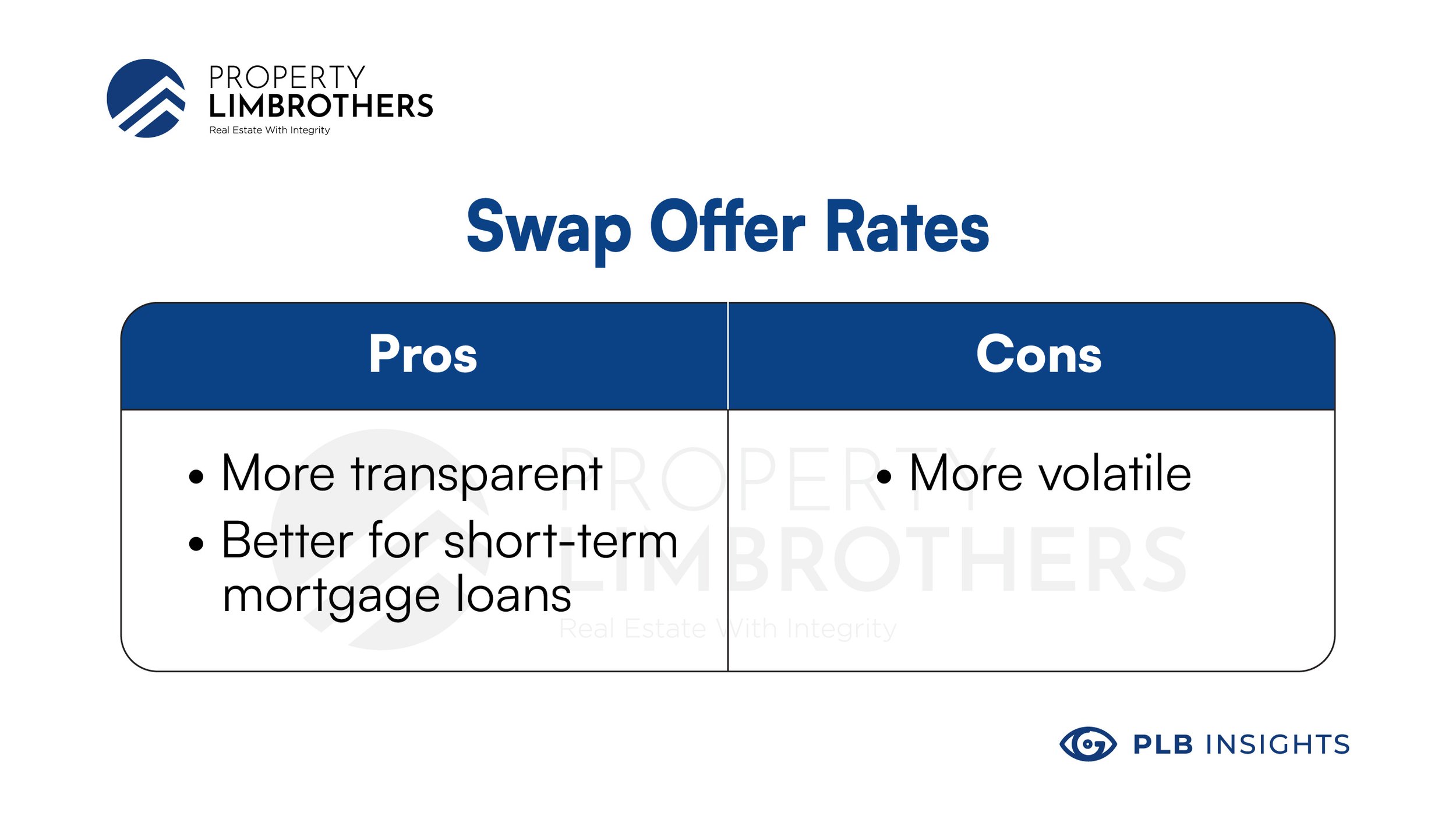 Additionally, banks have been making use of the Singapore Interbank Offer Rate (SIBOR) for some mortgage loans. SIBOR is a daily benchmark computed by the interest rates banks offer to one another when they lend money – hence the term ‘interbank’.

The SIBOR is a more transparent interest rate than a conventional bank board rate; you can actually check not only their rates down at the ABS official website, but also have a sense of how the SIBOR is calculated and where such a number could be derived from.

In addition, the SIBOR, as compared to the SOR, remains a more stable floating interest bank rate. As mentioned earlier, the SIBOR, unlike the SOR, bases its numbers on interbank lending interest rates in Singapore, rather than the more international USD LIBOR. Hence, the SIBOR is less vulnerable to global money market trends, and as such, would not fluctuate as much as the SOR.

The SIBOR is a more volatile floating interest bank rate than the typical board rates; after all, they are linked to the Singaporean interbank money market. Hence, if you intend to take on a SIBOR-based mortgage loan, you should be ready to stomach a greater level of volatility risk than you would with a board rate-based mortgage loan. 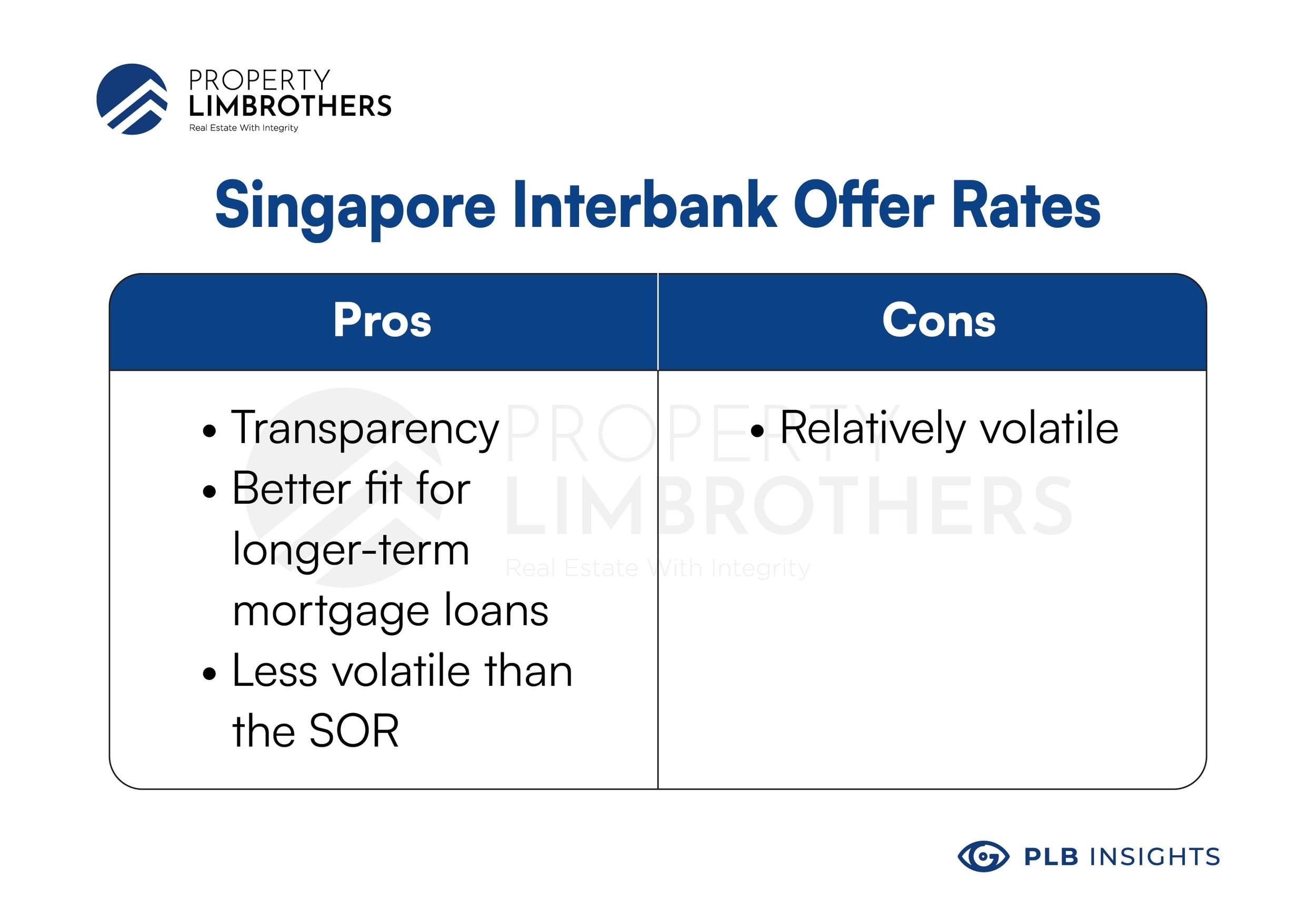 Often, clients that take on mortgage loans based on fixed deposit linked rates are attracted not only by the stability offered by these rates but also, unlike board rates, banks have less incentive to increase these rates.

This is because if banks raise their fixed deposit rates, sure, they would be earning more interest out of mortgage loan debtors. However, on the other hand, they would have to fork out more money to pay in accrued interest earned by fixed deposit account holders.

There remains, of course, the issue of less transparency: just like board rates, they are, at the end of the day, internally determined.

A summarised table of the pros and cons of Fixed Deposit Linked Rates may be found below: 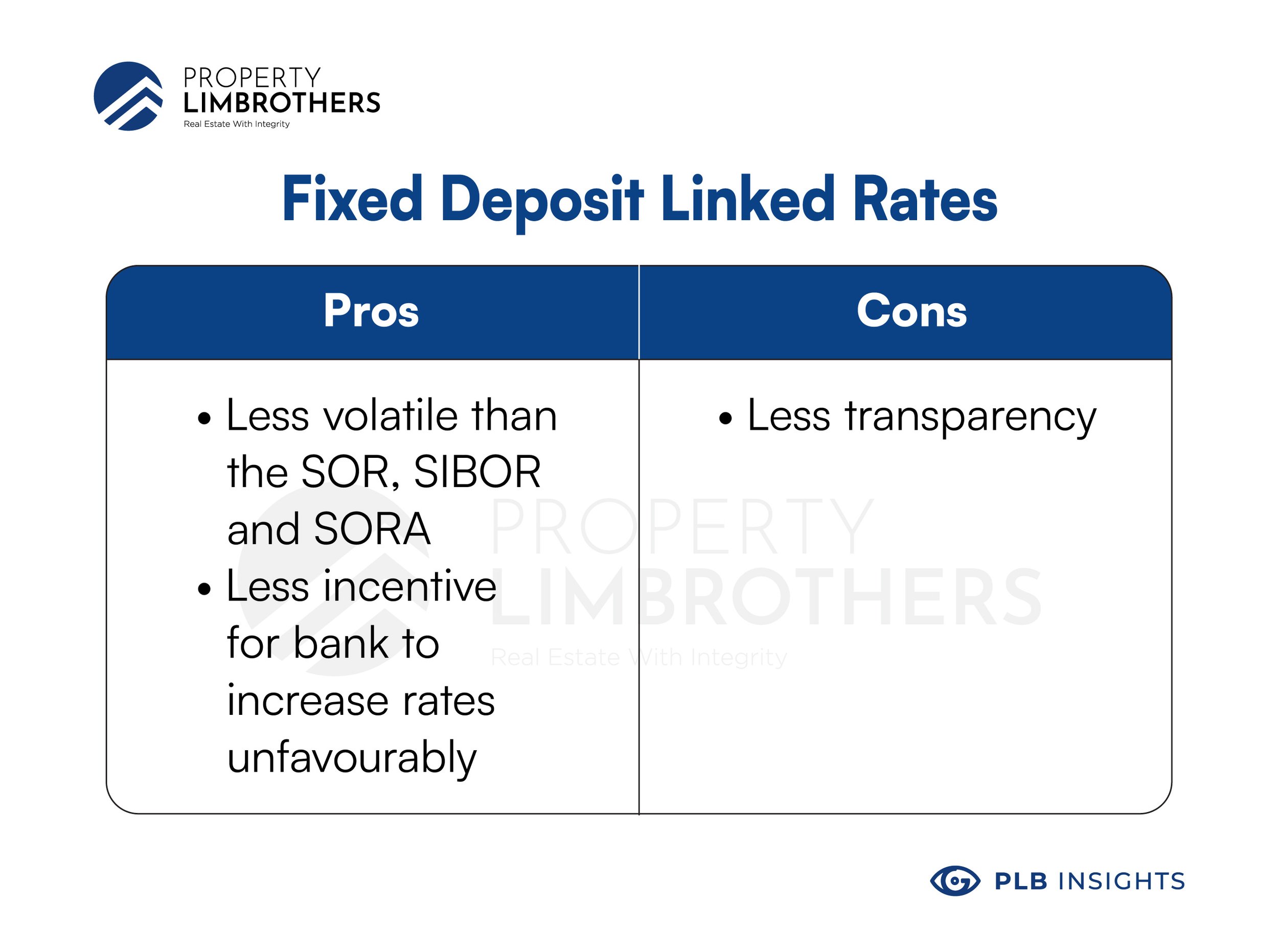 And finally we have The Singapore Overnight Rate Average, or SORA, is an interest rate benchmark managed by the Monetary Authority of Singapore (MAS) that is ‘propped up by a deep and liquid local overnight funding market’, according to the ABS’s description of SORA. But what does that mean?

In much simpler terms, the SORA is not determined by calculations of forecasts by a group of banks as to which direction the interest rates would go (unlike SIBOR, which takes its calculations from more speculative forward-looking rates given between banks).

Instead, the SORA takes its calculations from actual interbank lending transactions. 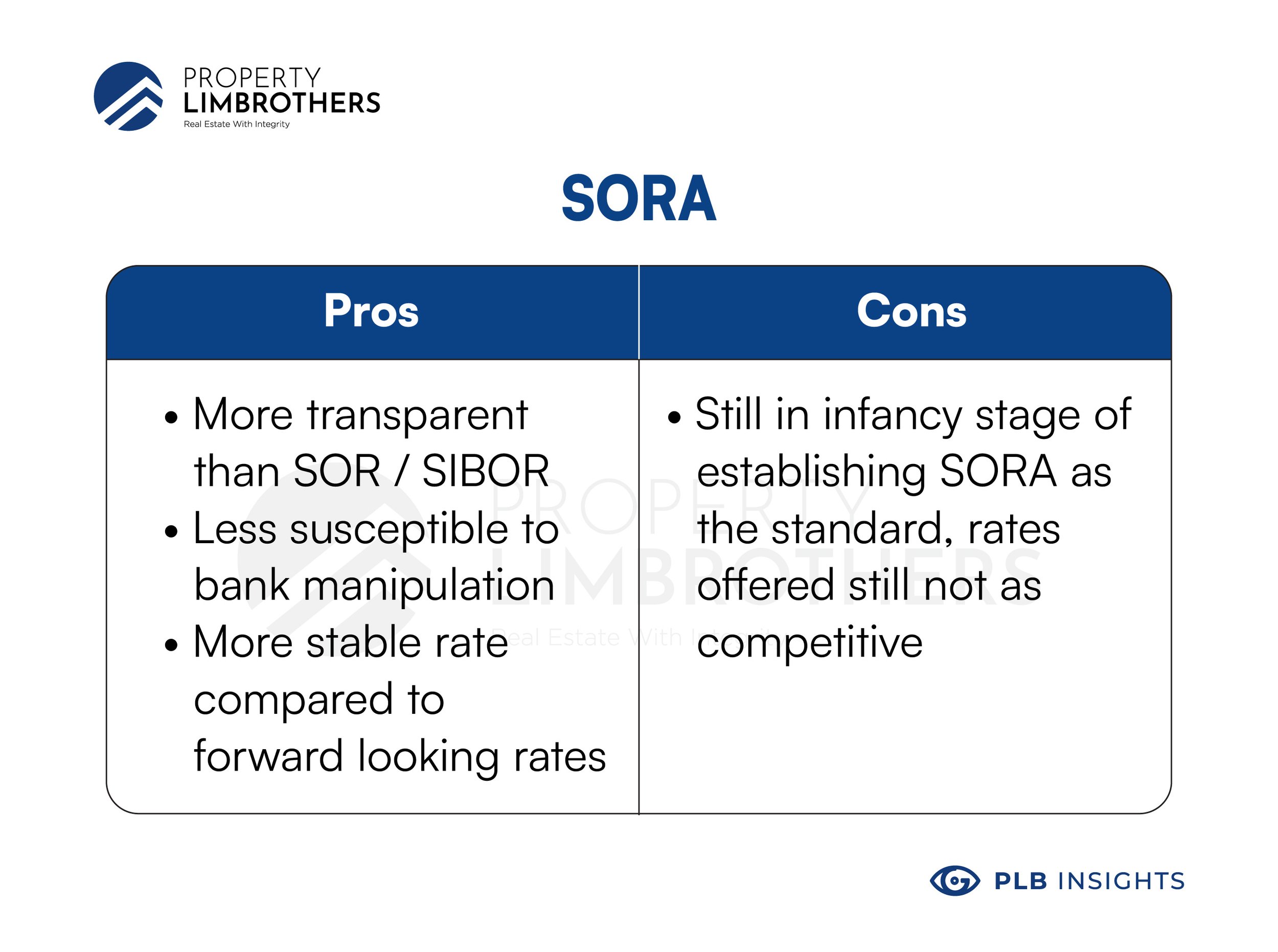 The SORA shares similar benefits of transparency to its cousins, the SOR and the SIBOR. While you may check your SOR and SIBOR rates on the official ABS website, you may check past and current SORA transactions on the MAS website.

Yet even in this regard, the SORA is arguably a more transparent derivative than the SOR and SIBOR, as SORA is published daily whilst SOR and SIBOR are published every seven days later on the official ABS website.

Additionally, the SORA is less susceptible to possible manipulation by banks in Singapore than the SIBOR, as the SIBOR could be – to a degree – subject to interest rate speculation by local banks.

We’re not saying that this is already happening with SIBOR right now. Still, with similar floating interest rate benchmarks such as LIBOR being allegedly at the centre of manipulation scandals amongst rate-setting banks, MAS’s decisions to promote the SORA over SIBOR and SOR can be summarised as a pre-emptive ‘better-safe-than-sorry’ move.

The averaging effect of compounded SORA rates results in a more stable rate compared to forward-looking term rates, which are exposed to idiosyncratic market factors on a single day’s fixing, such as quarter/year-end volatility.

Cash product pegged to compounded rates of SORA allows for more effective hedging as the basis risk between cash and derivatives markets is minimised.”

While SORA could spell as an improvement on the SIBOR and SOR, it may not be perfect just yet. We are still in the infancy stage of establishing SORA as the standard, hence what is being offered by banks currently may not be as competitive yet.

All these changes to the Floating Interest Rate Package market can be rather confusing. However we believe that consumers stand to benefit if they can play this change in their favour

Need more guidance? Feel free to reach out to our team. Click here to contact us now!

This article is written in conjunction with our #InvestorsSeries on Youtube. We drop nuggets of wisdom for you to learn more about Singapore’s property market! From frequently asked questions to market analysis, we’ll take you through them all with the PropertyLimBrothers team.

For more information on the topic of mortgage loans, we discussed the respective advantages and disadvantages of Fixed versus Floating Interest rates and their differences over here!

Are you curious to find out what trends the real estate market is following in 2022? We delve into just that in our insights article, “Homebuyers Shift Attention From the Central to City Fringe Homes” !

To check out our Investors Series Season 1, clickhere!

And for Investors Series Season 2, clickhere!