How did Stirling Residences owners achieve over 30% gains in capital appreciation?

Should I stay or should I go? When condominiums are near their TOP date, homeowners expect a bump up in the prices of their homes. Then prompts the question, is it time to sell it to realise those gains or should I continue staying and ride the wave? Questions like these are very important to homeowners looking for their next upgrade or are considering a move to another location for lifestyle reasons.

In this article, we will consider how Stirling Residences has appreciated so well in its recent TOP in 2022 Q2. We will also contextualise this in the current market conditions and whether or not this level of appreciation is considered unusual. Finally, we will take a glance into the not so distant future, to see if such levels of appreciation can be sustained even after the TOP period. The numbers used were extracted on 14 June 2022.

Stirling Residences is a 99-year leasehold apartment from 2017. It is located in District 3, Queenstown and has a total number of 1,259 units. According to Squarefoot Research, the buyer profile of this apartment is predominantly Singaporean (77.9%). The remaining buyers are Permanent Residents (17.4%) and Foreigners (4.5%). This is typical of condominiums and apartments in Singapore, with around three quarters of the inhabitants being Singaporeans. 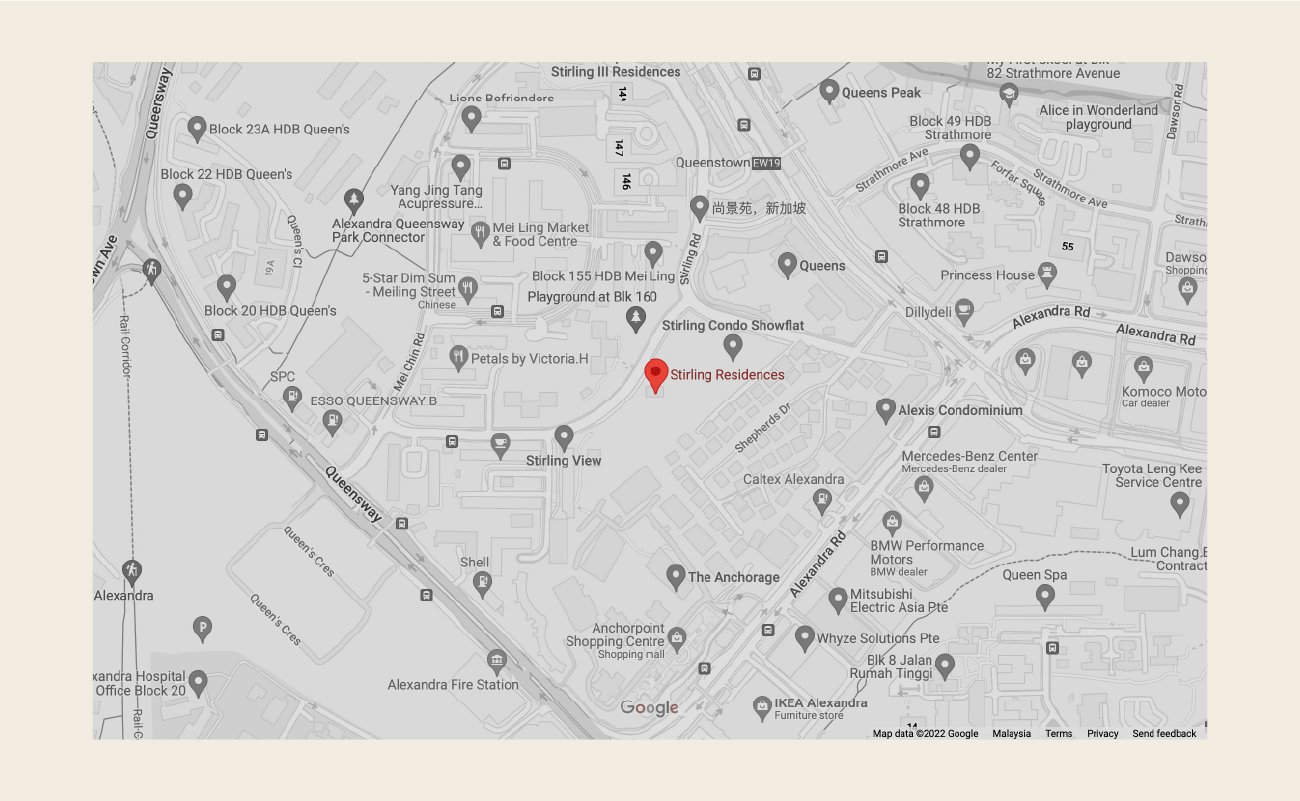 A simple majority of the buyers have their current addresses as HDBs (51.2%), and the remaining buyers are from private properties (48.8%). This is most commonly interpreted as the proportion of HDB upgraders out of the whole project. Generally, this allows you to gauge the demographics of buyers and sellers. It is possible that this project continues to be attractive to HDB upgraders looking for a resale apartment. Maintaining the 50-50 split between HDB upgraders and private property owners should not be surprising.

This project was developed by LN Development (Stirling) Private Limited, which is a joint venture between Logan Property Holdings Company Limited and Nanshan Group. While you may not have heard of them in the Singaporean real estate market, they have made their mark in the Chinese market.

Why are some people thinking of selling at TOP? Well, the psf of Stirling Residences has risen significantly since it launched almost 4 years ago in July 2018. It was selling at an average psf of $1,764 and that has risen to an average psf of between $2,143 (May 2022) to $2,315 (as of 14 June 2022). That is an increase of around 21% to 31% in the short span of 4 years. Many would be tempted to realise those gains especially in light of the looming economic troubles in the global market.

As we have discussed in our Quarter 1 Report, new launch prices have been growing a lot faster than resale prices for condominiums and apartments. The chart below shows the growth rates for new sales and resales of 99-year leasehold condos. The trend significantly tapers for resale performance, adding to the temptation of perhaps realising gains from freshly TOP-ed condos to jump to another project.

There are many caveats and cautionary warnings that should be put in here, especially if this is your only home. Selling your home and repurchasing a new launch or resale condo can present a high reinvestment risk. The large amount of capital involved, along with a significant lock-in time due to Seller’s Stamp Duty, makes your next buying decision a very important one. Most players on the market have trouble with managing their selling and purchasing timeline. Majority of them either end up with a period without a home from selling too early or getting slapped with the ABSD as they were not able to sell in time. Also remember that if you sell the house while you still have a loan locked-in, you might have to pay the penalty for early settlement.

The reinvestment risk is worsened by current market conditions of rising inflation and interest rates. Waiting to buy after you have sold might put you in a worse position as prices of housing are rapidly rising along with other basic goods in the global economy. If you wait to repurchase, you might have little choice but deal with higher prices. This problem of rising prices is magnified by rising mortgage interest rates, which will increase the cost of borrowing across the board. These factors will contribute to a risk of lower subsequent returns if the reinvestment decision is poorly made.

Why such high appreciation rates?

Is it normal to achieve this level of appreciation for new launch condominiums? Over the course of almost 4 years, the average psf of Stirling residences have risen from $1,700 to approximately $2,200. That’s a rough paper gain of around 29.4% or 7.35% annualised. Considering a buying price of $1.2 million, with a 75% loan at 2% interest, the total return on investment is approximately 217.6% or 54.4% annualised. A more conservative estimate with mortgage lock-in penalties and additional legal costs would be 180% or 45% annualised. This is the power of leverage.

There is also a preference for investing in new launches because of the Progressive Payment Scheme. This reduces the cost of capital for early buyers and they only pay the mortgage on the loan amount that is released to developers. Making it a lot friendlier for the cash flows of homeowners and investors.

The steep appreciation in the property price may be due to multiple factors which we cannot exactly tear apart and analyse. One reason could be due to developers gradually raising prices of units as they grow more confident in the ability to sell the remaining units. Some developers release the units for sale in phases, and gradually increase the prices.

Another reason could be the TOP effect, or the appreciation in prices as the property freshly hits the resale market. The profile of buyers are likely to prefer to live in new condos (first resident) but more importantly have the need to move in. The fresh state of the condo for residence or rent gives it a unique position to command a premium over other existing condos in the market.

Alternatively, what can explain the TOP effect is also the fact that the buyers of new launches may not be willing to sell their properties unless it is at a much higher price. These owners can have the option of staying-in themselves or renting the property out. The incentives to sell the home must be substantial enough for them to let go of the property. This is especially true when you consider the fact that they have been holding onto the property throughout its 4 years of construction.

An interesting trend from the historical transactions is the gradual dispersion of asking and transacted prices over time. This could be reflecting either the transaction of larger units (hence lower psf) or that the value is unequally distributed among units (some units harder to sell than others or owners desperately letting go). Being able to discern where your unit falls on the trendline (if you’re a seller) is important if you are looking to put it on the market. For buyers, the high variance presents some opportunities to find value for money purchases if you are able to discern if the property is fairly valued on the market.

Stirling Residences is unique also due to the prevalence of smaller units in the project. 41.7% of the total units are primarily 2-Bedders from 601-700 sqft. This could skew the psf transacted onto the higher range over time. As smaller units typically have a higher psf. This could partially explain why the appreciation of this project was so rapid, if more 2-Bedders were transacted closer to the present time.

Generally, it seems that people prefer newer condos, even if it is leasehold. At least within the immediate vicinity of Stirling Residences, the average psf of older condos in the area are transacting at a much lower price. We look at five nearby condos: Queens, Alexis, The Anchorage, Queens Peak, and Commonwealth Towers.

The more recent condo additions to the Queensland area are typically the ones selling at a higher price. It would seem that the older condos (freehold or not) do not catch up in terms of average psf, to the newer condos such as Queens Peak (completed 2020) and Commonwealth Towers (completed 2017). Although it is difficult to compare it this way, as these two newer condos are located closer to the MRT.

The interesting thing about Stirling Residences is the fact that it is marginally further away from the MRT as compared to Queens Peak and Commonwealth Towers and yet is able to command a higher selling price. This could be most likely attributed to the fact that it is a newer project that has just TOP-ed.

Where is Stirling Residences going from here?

Is the price of Stirling Residences able to sustain the rapid annualised growth of 7.35% a year? Where are the prices headed? Let’s look at the comparison with Queens Peak and Commonwealth Towers over time. Putting aside the differences in the project features itself, we look at the price comparison between those three properties.

From a simple comparison between the three properties, it would seem that age is an important factor when it comes to the appreciation of the property. Most of the appreciation seems to occur before the TOP. After which, price only slowly appreciates as seen from Queens Peak and Commonwealth Towers.

That being said, there are some interesting features that allow Stirling Residences to stand out a little. Compared to Queens Peak (76 units) and Commonwealth Towers (117 units), Stirling residences have more 2-Bedder rooms offered (524 units). This caters more towards couples, working professionals, or expatriates without children.

While this is a unique selling point of Stirling Residences in some sense, sellers must realise that if they currently own a 2-Bedder, they would face more competition from their own condo than others. The good thing is that at least nearby condos do not add to the competition of selling the same kind of units for instance 1-Bedder (400-600 sqft) and 3-Bedder (701-900 sqft) apartments.

The main reasons not to sell include the high reinvestment risk presented by the timeline planning for the subsequent property purchase, and current market conditions (rising inflation and interest rates).

Having considered both sides of the argument, often what is most important in a selling or buying decision is the personal needs of the decision maker. Perhaps, you have bought a 2-Bedder but now intend to have children. Personal family needs would change and you might consider upgrading to a bigger property. Or perhaps you are an investor looking to flip into another new launch or resale condo to achieve better returns. Whichever it is, as long as the reinvestment and market risks are well managed, a sell decision could be beneficial to the long term performance of the property portfolio.

If you need more help making sense of the current situation in District 3 or Stirling Residences’ TOP, you may reach out to our experts here. We can help you understand your needs better and provide you with timely advice on how to navigate reinvestment and market risks.